TTIP leaks prove that European way of life is at stake 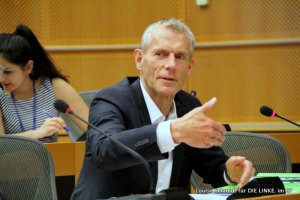 Following yesterday's leak of TTIP negotiation documents from both the EU and the US, GUE/NGL MEPs are calling for further transparency and public debate on TTIP and other international trade negotiations.

GUE/NGL Coordinator on the European Parliament's International Trade Committee (INTA) and Shadow Rapporteur on TTIP, Helmut Scholz, stated: "Contrary to what the European Commission has been telling us, the leaked TTIP papers document the fact that the TTIP negotiations are indeed about the quality of our food, the protection of our farming culture, and our right to regulate, even on the local level."

"Many of the United States' demands that have become visible to the public as a result of the leak are not negotiable for us in Europe. And probably also many of the EU positions in these documents are not acceptable for the US economic stakeholders. We shall never agree to trade off market access for car parts from the EU against market access for sensitive agricultural products from the US. Nor will we give up the sovereignty of democratically elected parliaments to decide on the rules and set the laws for the people and the environment, and to tame the free market.

Scholz congratulated Greenpeace "for proving the absurdity of the TTIP reading room secrecy," and explained that "the member states who had mandated the Commission to lead these negotiations in secrecy together with their US counterparts ignored the necessity and challenge to inform democratically elected MEPs and the public about the negotiations' aims and to include them in a broader consultation process."

"TTIP is much more than a trade agreement," he continued, "TTIP is about the way our economies are governed, and the standards, criteria and rules that people in the EU, in the US and globally, live by."

Scholz called on the European Commission "to stop and rethink the whole negotiation process, as it is high time to return to fair and transparent multilateral trading structures. International trade negotiators should not be trading on matters that are vital to quality of life, sustainable development and democracy in the EU, in the US and in all other regions of the world – in particular in the era of global value chains."

"That is also true for the negotiations on TiSA (the Trade in Services Agreement with 23 countries from outside the EU) as well as for the CETA (Comprehensive Economic and Trade Agreement with Canada) which has already been concluded. To a large extent, these draft agreements reflect the corporate interests in industry, agriculture and services, and they contradict a lot of environmental standards and social rights that have been achieved by people in all of these countries," Scholz concluded.

Spanish MEP, Lola Sánchez Caldentey, added: "Much of the leaked text was already available to MEPs in the TTIP reading room, but until now we were prevented from speaking openly about it."

"The fact that the negotiating text is now available to the public is a relief. We can all now understand why TTIP is a danger for our rights and our environment, and now there are even more reasons to call for public debate on this treaty.

"All of this also brings me to ask myself: Why is today's TTIP debriefing still restricted only to European Commission officials and MEPs. We should open these debriefings to civil society and the media immediately," Sánchez Caldentey concluded.