GUE/NGL supports appeal against removal of parliamentary immunity in Turkey 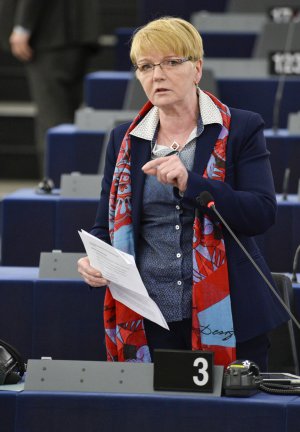 The left-wing group in the European Parliament, GUE/NGL, strongly condemns the current motion by the Turkish government to remove the legislative immunity of members of parliament.

GUE/NGL President, Gabi Zimmer, underlines that “with 46 out of 59 members of the People’s Democratic Party (HDP) being affected, the motion clearly seeks to destroy the HDP opposition in the Turkish Parliament."

“Removing the legislative immunity of the majority of HDP members of parliament, who are mainly representing the Kurdish population, is Erdoğan’s dangerous and false interpretation of anti-terror measures."

“I am deeply concerned about this anti-democratic move which diminishes all efforts towards finding a peaceful solution to the Kurdish conflict. If pushed through, this motion would facilitate ongoing criminalisation of elected members of parliament by making it possible to prosecute them for their political speeches in parliament. This motion has the potential to drag the country into an authoritarian regime and more political violence.”

Civil society organisations, politicians, journalists and academics worldwide are calling on the members of the Turkish Parliament to vote against this proposal, which is expected to be voted on May 16.

Numerous Members of the European Parliament are supporting the members of the Turkish Parliament who face the possibility of their immunity being lifted in the appeal which appears below:

SILENCING OPPOSITION IS NOT THE WAY TO DEAL WITH PROBLEMS

We, the undersigned members of the European Parliament, are deeply concerned about the recent amendment on the lifting of the legislative immunity of 129 members of parliament out of 550. The way it is presented in the public opinion by the government representatives proves that this bill is clearly targeting members of the Peoples’ Democratic Party (HDP – Halkların Demokratik Partisi) where 46 out of 59 MPs will be affected. Opposition is an integral part of democracies and a core value of the European Union. Silencing democratically elected opposition MPs for their political statements is the obstruction of parliament and against democratic principles.

Excluding democratically elected members of the parliament is not the way to deal with the Kurdish problem. On the contrary, if adopted, this bill will further aggravate already intense conflict in the Kurdish region (South-East) of Turkey.

We urgently call on members of the Grand National Assembly of Turkey not to support this amendment, which will move Turkey away from its EU path."