The EU-Turkey agreement, The EU progress report on Turkey 2015 and the safe third country concept 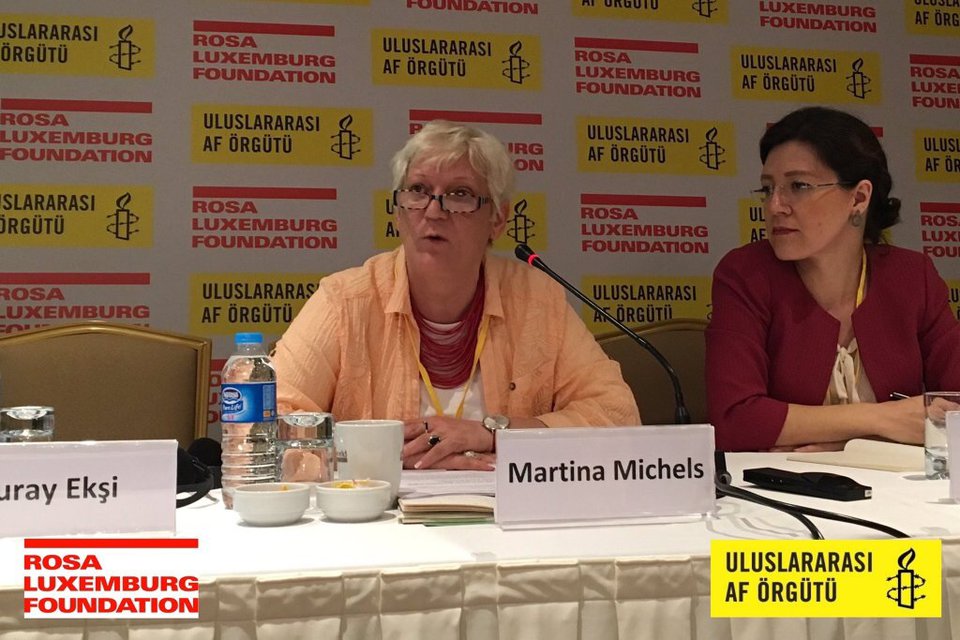 German translation - deutsche Übersetzung: a first translation of the speech you could find here, only in the last paras, some spoken word became more detailed. It would be changed on next Tuesday. This German version based on the script was made before the conference debates.

At first: the EU-Turkey Deal is a dirty Deal. For this opinion I will give some reasonal aspects.

Thank for your invitation. We need an open space to exchange information on chances to build a fair relationship between the EU and Turkey. I would like to speak about the responsibility of the European Union in current developments and to discuss two simple questions:

1. Why did 27 countries force Greece to recognise Turkey as a safe third country?

The debate in the European Parliament on the Commission’s progress report 2015 on Turkey was clear and critical towards political developments in Turkey.

The internal struggle for a presidential system in Turkey has entered a new round.

As questionable as the EU-Turkey agreement on the refugee issue is, it demanded to commit and bind anti-terror legislation in Turkey to human rights.

Criminalising the opposition by, for example, threatening parliamentarians to lift their immunity or by court proceedings like those against Can Dündar might be excluded by the application of the agreement.

Now the EU-Turkey deal is at risk because of the Prime Minister's resignation and a new interpretation of the mutual commitments is made.

In order to speak about a fair relationship between the EU and Turkey, I would like to take you on a small journey back in time.

Let me start 13 years ago. Don't worry, we will soon be back to the present.

2003, Angela Merkel led the conservative opposition to the social democrat-green-government coalition in Germany. Turkey's ambitions for EU accession were not given any space in her political agenda. In her European election campaign 2004 she fought for a reference to Christianity in the EU Constitution.

Already during the 1990ies, but at least after the terrorist attacks of 9/11, intellectual debates about a supposed "clash of civilizations" gained ground. Later they culminated in a reinvigoration of the proclamation the "decline of the West" in certain intellectual circles.

Today though, such figures of thought are a commonplace in right-wing populist parties and movements in Europe.

But at that time, in the early and mid 2000s, the large conservative parties used to be the major opponents of fair relations with Turkey. Perhaps it is not so much different today.

(18 years after Turkey's initial application to join the then European Economic Community).

Exactly at the same time, Orhan Pamuk replied to Angela Merkel's idea of a reference to the Christian God in the EU constitution. At that time he was awarded the Peace Prize of the German Book Traders.

In his acceptance speech at the awarding ceremony, he said:

"The great novelists I read as a child and a young man did not define Europe by its Christian faith but by its individualism. It was because they described Europe through heroes who were struggling to free themselves, express their creativity and make their dreams come true, that their novels spoke to my heart.

Europe has gained the respect of the non-western world for the ideals it has done so much to nurture: liberty, equality, and fraternity.

If Europe’s soul is enlightenment, equality and democracy, if it is to be a union predicated on peace, then Turkey has a place in it.

A Europe defining itself on narrow Christian terms will, like a Turkey that tries to derive its strength only from its religion, be an inward-looking place divorced from reality, and more bound to the past than to the future.”

(I finish the Quotation)

Pamuk spoke of freedom, equality and solidarity, and that those values will only have the quality of fundamental values were they global and universal.

But what is the EU doing today?

Instead of working towards a solution for a common human asylum policy, the EU seals of its borders, exacerbates regional conflicts and produces new problems.

The victims are refugees, are also the political and social opposition in Turkey.

The winners of the EU-Turkey-Deal are the supporters of a presidential system in Turkey.

The winners are racists and right-wing extremists within Europe.

The EU has adopted a policy, where only figures and not the interests and needs of people are

Today, European leaders quarrel over refugee thresholds, quotas and absorption capacities - somewhat bitterly ironic given the situations in Jordan, Lebanon and even in in Turkey.

This is a caricature of a political Europe, which itself had initiated so many wars.

Let us have a look at the recent past:

Europe rescued banks but could not resolve the Euro crisis.

The Eurogroup has imposed loans on Greece, but achieved nothing except damaging democracy.

All democratic debates about a social and peaceful future that that did not take place in Europe created space for racists.

Right-wing populists dictate the tone when it comes to discussing integration and diversity: against Muslim, against women, against gays and lesbians, against various minorities, including people in need.

The pointless austerity and competition policies by the EU Commission and its insincere trade policy, all this has been blocking Europe's veins of social and environmental innovation already since years.

And the very least a democratic Europe needs is the support of Turkish politics by a useless deal.

In order to keep the deal, last week the EU Commission even proposed to lift the visa requirements for Turkish citizens, without observance all european criteria. The EP will not accept this, before Turkey be fullfilled all criteria.

Finally, I shall cite a few points that make me believe that this deal is a case to bring in front of the European Court of Human Rights (ECHR).

This conference has compiled a large amount of information on the situation of refugees. The pressure to act is growing every day that passes leaving people unprotected from bullets, held back by fences from safe protection and

I refer to the EU-Council Statement before the EU Summit in March of 7 March 2016, which activated the EU-Turkey Action Plan of November 2015.

The EU-Turkey statement of the Council (practically) denounces international obligations to the protection of refugees and the individual right to asylum. The notion of "irregular refugees" lacks any human rights substance. There are no irregular refugees. Nor can such a denomination be defined by agreement.

By this agreement, Turkey is allowed to refuse entry to Syrian refugees and to displace them outside of its territory in so-called ‘safe areas’. This is illegal under international law. The recognition of the Turkish approach of ‘safe zones’, is supporting Turkey’s foreign policy, which can also be directed against Kurdish combatants.

By this agreement, Turkey is considered as a “safe third country”, therefore the individual right to seek asylum before expulsion is not guaranteed. Turkey has signed the Geneva Convention only with reservations and does not recognise many of the internally displaced people as refugees. Treating Turkey as a safe third country and refusing a case by case assessment is against international law.

The managing director of Pro Asyl in Germany, Mr Burkhardt, warned against playing off refugees from Afghanistan or Iraq against victims of the Syrian civil war. It is also for this reason that "expulsions to Turkey ... would be a blatant violation of the European Convention on Human Rights”.

The statement of the EU Council reads that “The EU Heads of State or Government also discussed with the Turkish Prime Minister the situation of the media in Turkey". It did not state though, that the situation is critical. But the real situation does not justify a treatment of Turkey as a “safe third country”.

The statement reinforces the fortress Europe policies that are linked to the FRONTEX agency and EUROSUR, which results in fighting refugees instead of fighting the root causes of migration.

We cannot let that happen.

Every day 27 governments demand Greece to treat Turkey as a safe third country. 27 Heads of State or Government look the other way when people in Idomeni are hit by rubber bullets in front of the closed down Balkan route.

Many Greeks and activists from across Europe are helping refugees, report from the hotspots that resemble prisons, and about of the expulsions.

Despite the aid on the ground, the ECJ found that the situation of refugees in Greece violates Art. 3 of the European Convention on Human Rights;

The Commission and the Council must put an end to these failed policies, instead of making Europe losing its soul, its history and future.

Europe must finally bear its responsibility for the global situation of refugees.

The EU-Turkey agreement is not a solution, but part of the problem.

It intensifies the Syria conflict, destroys hopes of the Kurds and of the political opposition for a peaceful life and participation in a Turkey that once sought to come closer to Europe.