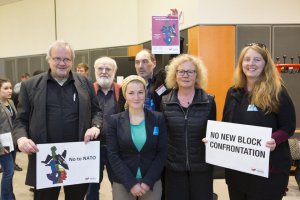 With the Warsaw NATO Summit just over a month away, a conference initiated by the GUE/NGL group called ‘There is an Alternative - NO TO NATO’ has been held this week in the European Parliament in Brussels.

NATO Secretary General Jens Stoltenberg has already said stationing troops in eastern Europe will be high on the agenda at the July summit.

In addition, the alliance is looking to extend its partnership deep into the former Soviet Union with non-NATO members such as Ukraine, Georgia and Moldova through military training and building capacities - encroaching upon Russia’s sphere of influence.

Furthermore, there will be discussions with Jordan, Iraq and Tunisia on tackling terrorism and the refugee crisis.

Opening the two-day conference, German MEP Sabine Lösing condemned the alliance’s thirst for expansion, describing it as a “365-degree manoeuvre”:

“NATO recently signed an agreement with Sweden so that they can carry out more missions in the country - making the non-allied part of northern Europe an important area again.”

“We keep hearing these arguments all the time that we need more weapons, more defence...I think we can all agree that this logic will only lead to a very dangerous situation,” said Lösing.

The conference also heard from activists, academics, journalists and politicians from around the world, with fellow Spanish MEP Javier Couso moderating discussions including Russia’s role in this ‘new Cold War’:

“The reason for setting up this event is to try to reiterate once again that we need to rethink and reanalyse NATO. We need to get away from the military bent that these leaders have acquired.”

“Unfortunately, the Gulf War was what it took to flag up people’s attention to the fact that the US wanted a new world order. And right now in Europe, we are being subordinated by the United States' geostrategic and political interests for a new Cold War,” the Spanish MEP concluded.