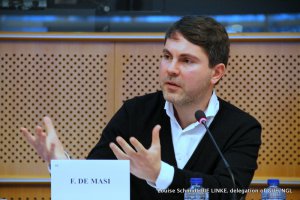 In light of the recent scandals over LuxLeaks and the Panama Papers, the European Parliament spent Tuesday morning in Strasbourg debating on the Commission’s proposal for an anti-tax avoidance directive, with a vote on a resolution on Wednesday.

Opening the debate on behalf of the GUE/NGL group, shadow rapporteur and member of the Committee on Economic and Monetary Affairs, German MEP Fabio De Masi, expressed his disappointment with the latest proposals,

"Since LuxLeaks and the Panama Papers, we’ve learned that every cleaner in the European Parliament pays more taxes on his or her income than Google or Apple."

"Whether they are letter-box companies or not, businesses can change their tax obligations. And now we see the usual crowds in the Council as well as the Parliament trying to force changes to the original draft,” says the German MEP.

“Interest rates are already way below the threshold that was proposed to the Commission and different from what we see in the United States.”

“There is virtually no desire to do anything about interest rate barriers or thresholds and this only works to serve the tax havens.”

"We are going to be disappointed as long as cleaners in the Parliament are taxed more heavily than thieves like McDonald's," De Masi concluded.

Meanwhile, GUE/NGL MEP Marisa Matias took aim at Pierre Muscovici, the European Commissioner on Economic and Financial Affairs, Taxation and Customs, who had lauded the much-criticised Dutch EU presidency in its leadership on this issue:

“Citizens are paying tax; multinationals are avoiding it. Commissioner Muscovici is being disingenuous in praising the Dutch presidency as having done a good job because that is not true.”

“I’ve heard from some right-wing colleagues in this parliament saying this directive was against the economy - no, that is not the case. Chasing up taxes is not anti-economy - it’s tax justice,” reasoned the Portuguese MEP.

Dimitrios Papadimoulis, Vice-President of the European Parliament and GUE/NGL MEP echoed those sentiments and also said more needs to be done:

"With €1 trillion lost annually through this tax swindle from member states and our budget to fund development, we are talking about a huge gap in justice and fair competition - all at the expense of the honest taxpayers."

"Profits should be taxed where they are produced and we should have a blacklist of tax evaders and strong penalties. We also need stronger EU and global cooperation in order to do something about this crass injustice," added the Greek MEP.

Similarly, GUE/NGL MEP Miguel Viegas found positives in the original document but is disappointed by the rollbacks:

“The objectives of this directive deserve our praise. But the Commissioner’s announcement for 2015 seems to disregard reality in the name of ‘pragmatism’ - that is to say, the hypocrisy of those countries which have laid the groundwork to exempt large companies from paying taxes.”

“Currently, we have a minimalist approach from the Commission which doesn’t live up to our citizens’ legitimate hopes. This is why we call for the maximalist approach in this report - mirroring the OECD’s plans to limit tax base erosion and profit.”

“Once again, here we have a report that hoodwinks our citizens into thinking we are working on their behalf,” said the Portuguese MEP.