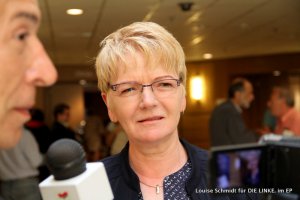 GUE/NGL President Gabi Zimmer has offered her deepest sympathy to the family, friends and colleagues of British MP, Jo Cox, who was murdered whilst carrying out constituency work on Thursday.

“We are very saddened to learn of this senseless, brutal murder of Jo Cox MP whose devotion to her constituents and her political beliefs can serve as an example to us all. We pay tribute to her lifelong contribution to public services and, in particular, her unstinting support for Syrian refugees and people in less fortunate circumstances over many, many years.”

“This tragedy should also act as a wake-up call to all of us that democracy is at stake if uncompromising rhetoric leads to political polarisation in our society, and to growing hatred which encourages violence as a means of conflict,” Zimmer added.

“In a Brexit campaign which has polarised the country, we have seen bitter personal attacks, bullying and lies about the EU instead of the issues that really matter to the voters.”

“Politicians have a duty to behave respectfully and responsibly and should never exploit social division for personal and political gains. Voters deserve better than that.”

“Parliamentarians are elected by the people to serve the people and their interests. This is how a democracy works. We must not allow this murder to undermine our duty as elected representatives. Nor should any of us live in fear or intimidation just for what we believe in,” she concluded.