Brexit: EU-Canada trade agreement must now be frozen before Commission meeting on July 5 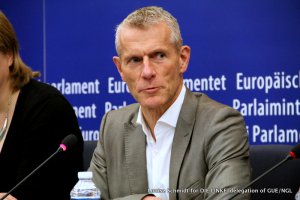 Considering the major role of the United Kingdom in the new EU-Canada trade agreement, GUE/NGL has called on Commissioner Malström to freeze the agreement before the July 5 meeting of the European Commission which is scheduled to approve it.

One third of Canada's trade with the European Union is with the United Kingdom. Unsurprisingly, the United Kingdom has been the greatest supporter of the Comprehensive Economic and Trade Agreement (CETA), between the EU and Canada.

GUE/NGL MEPs are calling for the agreement to be frozen at least until a debate has been held in Parliament.

GUE/NGL Shadow Rapporteur on CETA, Anne-Marie Mineur, explained: "If, in a major trade agreement such as CETA, one of the players changes significantly in size and nature, the deal is no longer the same."

"Following the referendum result in the United Kingdom, a new balance of interests will arise, other interests will prevail, and the entire agreement must be reconsidered."

The Dutch MEP continued, "A reconsideration of the agreement is also necessary because the text that has been negotiated is, in itself, highly contentious. The agreement's arbitration mechanism – the Investment Court System (previously known as the Investor-State Dispute Settlement mechanism) – has received severe public criticism."

GUE/NGL Coordinator on the International Trade Committee, Helmut Scholz, added: "There has also been heated debate about whether the Commission has exclusive competence to conclude the agreement or whether the member states have shared competence on this matter. This makes the decision even more problematic."

"The majority vote of British people to leave the EU makes the decision even more challenging. It is now clear that it must be put as a mixed agreement under the co-ratification of all EU member states.

Yet, there is a possibility that the Commission will go ahead and conclude the CETA agreement on behalf of the member states at its next College of Commissioners meeting on July 5, as it had originally planned.

Given the key role that criticism over lack of democracy in the EU played in the Brexit vote, if the Commission approved the CETA agreement on July 5, it would give a clear signal that the Commission has not listened to citizens' voices. It would show that the Commission does not want more democracy and instead fears the voices of the member states' parliaments and the people of Europe.

"For these reasons, we insist that the procedure must be frozen, and the issue should be debated not only by the Council but within the European Parliament too," Scholz concluded.