TTIP is failing, but further action is needed to stop it and similar trade agreements 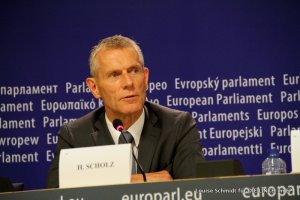 While German Vice-Chancellor, Sigmar Gabriel, stated yesterday that the negotiations over the TTIP agreement have failed, further action is needed if we are to stop TTIP and similar agreements that are still under negotiation by the European Union.

Gabriel, a leader of social democracy in Europe, stated yesterday that TTIP has practically failed due to the hard-line positions of the US negotiators.

Helmut Scholz, GUE/NGL Coordinator for the European Parliament's International Trade Committee, comments: “If a majority of social democratic parties in Europe would reject TTIP, GUE/NGL will welcome this move very much."

"Nevertheless, right now the Comprehensive Economic and Trade Agreement between the EU and Canada (CETA) is still on the table waiting for ratification.

"CETA is a kind of blueprint of, and for, TTIP. It would give full mutual market access to all economic stakeholders and investors from within the internal market of the EU and the North American Free Trade Area that are registered and seated either in Canada or the EU.

"The ratification of this agreement is scheduled to be followed by the ratification of the Trade in Services Agreement (TiSA), a so-called plurilateral agreement aiming to liberalise the full spectrum of services much further than under the World Trade Organisation's General Agreement on Trade in Services (GATS). These are two major threats to European people, and so far, Sigmar Gabriel is not opposing these."

Scholz questioned the motives behind Gabriel's statement yesterday, given that his position on these agreements has not changed and Chancellor Merkel has immediately reinforced her support for TTIP: "We must not forget that Gabriel's statement comes right before elections in Berlin and Mecklenburg-Western Pomerania."

“We can only but expect that social democrats and other parties will finally hear the voice of European citizens on such free trade deals.

"Major protests against these purely neoliberal trade deals are planned in 10 cities of Germany on September 17, in Brussels on September 20, and in Bratislava on September 22. These will prove how unpopular mega-regional free trade policies are and the necessity of deeply restructuring fundamental economic, monetary and commercial policies, as well as the future cooperation between European and third countries.

“A rejection of those big free trade deals would allow interesting alternatives to the current international trade policies - including strengthening of regional and circular economies - to be developed and consolidated.

"It is high time to seriously consider that people in Europe really want to have a new economic order based on social principles and employment creation. In light of climate change, refugees seeking new homes, devasting wars in many regions and countries worldwide, simply responding to transnational companies' desire for profits is not the answer."

GUE/NGL is preparing a hearing on economic alternatives that will take place on November 15 in the European Parliament in Brussels.