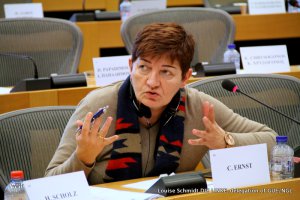 Former EU commissioner Günter Verheugen, responsible for enterprise and industry between 2004 and 2010, was grilled today by MEPs in the Committee of Inquiry into Emission Measurements in the Automotive Sector (EMIS).

Mr Verheugen had refused an earlier invitation to attend the hearing to clarify the role of his office in the run-up to the Volkswagen emissions testing scandal.

GUE/NGL MEP Cornelia Ernst said that the former Commissioner could no longer avoid facing the Committee:

“Questions over Mr Verheugen’s failure to oversee the implementation of the type approval regulation have been piling up and thus it became unavoidable for the former Commissioner to attend the hearing. Unsurprisingly Mr Verheugen continues to point the finger at member states absolving himself from blame."

"The hearings so far have confirmed that big gaps existed between emissions measurements under laboratory conditions and in real driving situations. Seemingly Mr Verheugen was aware of this situation yet did nothing to intervene,” Ernst continued.

The German MEP accused the Commissioner of doing the bidding of industry giants at the expense of the environment when crafting the legislation:

“When Mr Verheugen appointed the CARS 21 High Level Group in 2005, his goal was to ensure competitiveness of the European car industry and thus the work group was composed mainly of lobbyists for the car industry. Regulation (EG) No. 443/2009 from April 23 2009 to determine norms for car emissions within the framework of an overall reduction of vehicle emissions is based in essence on the recommendations of this very work group. The responsibility of Mr Verheugen lies firstly in supporting the interests of the car lobbyists and secondly in failing to monitor the implementation of the regulations.”

Dutch MEP Dennis de Jong said that more should have been done to have civil society voices represented in CARS 21:

“Mr Verheugen stated in the hearing that he wasn't aware about the irregularities happening in the emissions tests. That is not surprising given that CARS 21 was composed mainly of the automotive sector and that voices from civil society were excluded. He should have allowed for environmental and consumer groups to take part in the work group that issued the recommendations that shaped the final legislation. “

The inquiry committee has completed the first phase of the hearings with experts, trade associations and non-governmental organisations. Committee members also questioned Stavros Dimas, Environment Commissioner from 2004 to 2010, as well as car manufacturers, including Mitsubishi, Renault and Volkswagen.