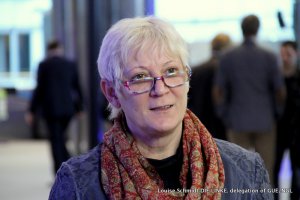 In a joint debate on Cohesion policy as part of the Europe 2020 Strategy in the European Parliament last night, GUE/NGL MEPs said better coordination, greater transparency and less austerity are needed if the policy is to succeed.

Opening the debate for the group, German MEP and member of the Committee on Regional Development, Martina Michels, said:

“The EU’s austerity policy has been the single biggest threat to cohesion and public investment policies. It is simply absurd to threaten Spain and Portugal with a freeze in subsidies from the structural funds when these countries have little or no leeway for investments.”

“In addition, the proposed cuts to the EU budget for 2017 will hit cohesion hard and this will seriously undermine all we have done to improve the living conditions of people in Europe.”

“A new social pillar as suggested by Juncker for the EU sounds good on paper but, at the same time, we cannot dismantle what we already have,” Michels concluded.

“In the last few years, there’s been an increase in inequalities both in social and regional terms and the EU’s cohesion fund is being undermined by that.”

“People in southern Europe aren’t seeing the benefits and the whole policy needs to be strengthened - not weakened.”

“It needs to go to areas where there’s the greatest poverty, unemployment and underinvestment. We urgently need to mobilise the cohesion fund to do something about that,” he concluded.

Italian MEP Curzio Maltese, who shadowed the Bresso report on the TRAN committee, was damning in what he regards as the misuse of EU funds:

“Instead of operating on an existing railway which is perfectly capable of handling freight, €26 billion is being spent on the new Turin-Lyon high-speed railway line.”

“Meanwhile, almost €6 billion euros are being wasted on the MOSE dam project which many experts believe will be useless in protecting Venice from future floods.”

“There’s been so much corruption and disasters every year and they will carry on unless we put a stop to these white elephant projects. Start spending public money in the public interest instead of ridiculous projects like the Turin-Lyon railway!” concluded Maltese.