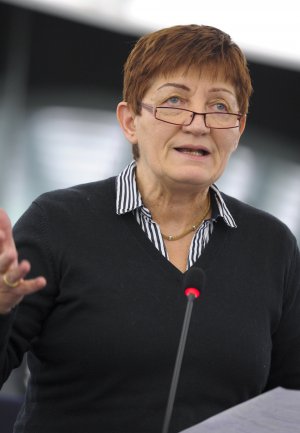 Proposals by the European Council and Commission on implementing security measures to tackle the myriad of challenges facing Europe have been strongly criticised by GUE/NGL during a debate in the European Parliament today.

German MEP Cornelia Ernst described the proposals as flawed and criticised the Commission for its lack of strategy:

“What we have is neither new nor does it represent a coherent system. The Commission has no strategy when it comes to internal security because as a minimum requirement, it assumes our existing instruments work well.”

“We already have enough security tools and the Commission has been hoarding billions of data like a magpie collecting shiny objects in its nest. But we are investing too little on the preventive side and the brunt of these proposals focuses on repression. It’s completely unequal and flawed,” added the GUE/NGL co-ordinator on the Committee on Civil Liberties, Justice and Home Affairs (LIBE).

Ernst also criticised the lack of proposals to safeguard fundamental rights as a breach of confidence in EU citizens, and said European Charter of Fundamental Rights was being ignored. Instead, she argued that the Commission should look further afield to tackle the root causes:

“What about stopping the sources of finance to terrorism, or investigating the role of countries like Saudi Arabia?” asked Ernst.

For Spanish MEP Miguel Urbán, xenophobia is one reason why the Commission has got it wrong with its proposals:

“The fences aren’t enough to stem the flow of migration - people are still trying to come and there are more deaths directly related to our borders and security policy.”

“There’s the defence industry at play on both sides of the fence, too - with people traffickers on the other.”

“So we keep hearing that border checks must remain with ever-harsher rhetoric linking terrorism, organised crime and people trafficking with security,” added Urbán.

“Europe is building a fence around itself, is becoming more racist and is undermining people’s liberty.”

“Xenophobia is driving Europe’s security policy when we should be looking at the other side of this crisis,” concluded the Spanish MEP.