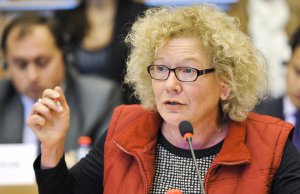 A memo leaked earlier had shown that the EU threatened to strip Afghanistan of aid if the country rejected the deal.

Speaking in the European Parliament debate in response to the Commission statement on the issue, GUE/NGL MEP Malin Björk called the deal “unethical and irresponsible”, contending that it could spell a death sentence for the most vulnerable groups:

“Everyone in this room knows that Afghanistan is not a safe country for women or children or teenage boys, particularly not for Hazaras. Everyone knows that the Taliban recruit teenage boys and that the security situation is incredibly unstable and dangerous.”

The Swedish MEP condemned the EU for blackmailing Afghanistan with this deal:

“The EU uses financial aid to force Afghanistan to accept back asylum seekers. The Afghan government has made it clear it cannot handle this pressure. The EU is using this same blackmail in deals it is negotiating with other third countries. These agreements must be stopped.”

"Afghanistan is not a safe third country - denying this is irresponsible, inhuman and cynical. After 15 years of war, the reality is frightening: from January to September 2016, 8,397 civilian victims were documented – according to the latest figures from United Nation Assistance Mission in Afghanistan. That is why people who are fleeing from this country need the right to stay."

GUE/NGL MEP Lola Sánchez Caldentey censured the Commission for not seeking the Parliament’s assent before agreeing to a potentially illegal deal:

“This type of agreement has to have the consent of the European Parliament and the Commission has ignored this house.”

“It is illegal to return migrants to countries that are not safe and Afghanistan is not safe,” Sánchez Caldentey concluded.