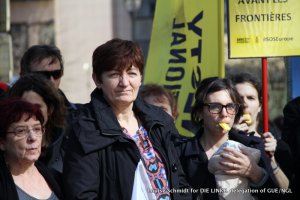 In the European Parliament today, GUE/NGL MEPs have condemned the EU's continued failure to support refugee children and called for safe and legal pathways into Europe.

During an oral question on the topic of EU policies and actions to protect children in the context of migration, GUE/NGL MEPs highlighted the hypocrisy of talking about respecting children's rights while implementing policies that do not respect their rights at all.

GUE/NGL Coordinator on the Civil Liberties, Justice and Home Affairs Committee, Cornelia Ernst, addressed both the plenary and the European Commission: "Last year GUE/NGL MEPs visited several countries and witnessed first-hand the movement of refugees. Many of them were children who have never been to school, who were living in camps, on the street or in prison-like conditions in Turkey.

"The IOM estimates that between 2014 and 2016, 15,000 refugee children disappeared, possibly even died, in the desert in Jordan, on the Western Balkans route and in the Mediterranean.

"The fact is, since there are no legal entry points to Europe, these children’s lives are at risk. They are left alone and vulnerable.

"While the EU basks in the glory of a Nobel Peace Prize, it is failing these children that we have a duty to help.

"We call for the creation of a humanitarian corridor to enable children to enter the EU legally; for immediate family reunification; for free legal support; and for them to have the same legal rights as children who are residents in Europe.

"These children cannot wait. Winter is coming very soon. We must act now."

Swedish MEP, Malin Björk, added: "It's time to stop talking hypocritically. It's not appropriate to have policies of building walls and at the same time talk about human rights."

"How can you say we are creating more security for refugee children while making it impossible for them to get permanent residence?

"How can you say you are working for refugee children’s rights while you are returning them to third countries?

"In Greece, refugee children and families are stranded simply because there is not enough capacity to deal with their asylum requests.

"These policies and the new asylum rules being negotiated are anti-children," Björk concluded.