Ongoing debate on CETA confirms that this agreement must be rejected 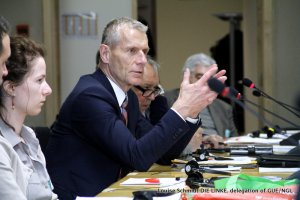 As Belgium nears reaching an agreement on the EU-Canada free trade agreement under pressure today, GUE/NGL MEPs are calling for debate and voting at the level of member states' parliaments and the European Parliament.

GUE/NGL Coordinator on the European Parliament's International Trade Committee, Helmut Scholz, comments: "The Walloons are by no means alone in their criticism of CETA. The Irish Senate has taken a decision against CETA; half of the mayors of Slovenia signed a letter to their national government with the demand not to sign CETA; and more than 2 000 cities, municipalities and regions in the member states of the European Union have declared themselves as 'TTIP and CETA free zones'."

While Belgium's extended negotiation over aspects of CETA lead to some improvements, the main problems affecting jobs, labour rights, public services, social and consumer rights, as well as health, environmental and data protection remain in the agreement.

"Massive job losses in both the EU and Canada are anticipated as a result of CETA. A new study by the American Tufts University shows that the change in our economies by CETA will result in a marked withdrawal of governments from the provision of services which would lead to the loss of many jobs. At the same time promises that CETA will benefit growth is strongly questioned by Philippe Maystadt, former CEO of the European Investment bank (EIB).

"In the agricultural sector, the EU is not protected against the intensive use of pesticides and antibiotics in Canada which are banned in the EU.

"In addition, the quotas of beef to be imported to the EU from Canada that were agreed upon in CETA were calculated on the basis of the biggest importer – the United Kingdom – remaining a member state of the EU. Now that quantity will have to be imported into the rest of the EU," the German MEP explains.

Belgium's strong stand on CETA followed mass mobilisations of citizens across Europe and brought debate over the agreement to the wider public.

Among the criticisms is the fact that the negotiation of CETA was a very untransparent process by the European Commission, mired in secrecy and confusion. The debate that has taken place over the past three weeks is highlighting that Commission has made many mistakes, during and after the negotiations.

Alongside regional and local governments, trade unions and millions of citizens, Scholz believes that "the member states parliaments and the European Parliament must now be given the opportunity to debate and vote on the agreement."

GUE/NGL has requested a full debate and resolution (with opinions from most of the committees) on CETA in the European Parliament, but the proposal has so far been blocked by the EPP, ALDE and S&D groups.

GUE/NGL Shadown on CETA, Anne-Marie Mineur, adds: "I remain very worried about the fact that the Belgian Government has agreed to sign this agreement. CETA is an agreement that was drafted at the request of, and for the benefit of, corporate Europe. This comes at a huge cost to social, environmental and labour standards. I am opposed to it and that has not changed."

"Having said that, I am pleased by the outcome achieved by the French and German speaking regions of Belgium during the negotiations. The fact that the European Court of Justice will be asked for an opinion on the compatibility of the Investment Court System with the European legal system is especially important.

"Given the major changes that have been made to the agreement, the text should be given back to the national parliaments for reconsideration. Moreover, the European Parliament's International Trade Committee should do a proper job in assessing this agreement, and have a proper procedure with a real resolution in which members can discuss the agreement and express their opinion, instead of being limited to only saying yes or no."