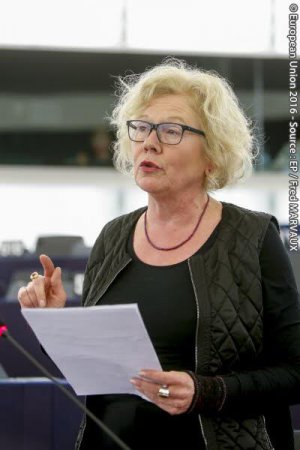 This comes as EU member states are asked to contribute more towards the bloc’s common security and defence policies.

On the CFSP report, German MEP Sabine Lösing – who is also GUE/NGL Coordinator on the Committee on Foreign Affairs (AFET) - was quick to point out that a lot of development aid actually flows directly into European companies and organisations:

“Arms are being exported in particular to countries in the Middle East and the Far East. I find it rather cynical as you see these people trying to flee to Europe so that they aren’t killed by these weapons. However, they are effectively held up from coming into Europe and are looking for other ways - but it’s almost impossible to find legal migration routes,” she pointed out.

Also missing in the report, said Lösing, is the EU’s militarisation in the Sahel and Tunisia - all of which comes at the expense of human rights. She lamented:

“We are heading in only one direction: more arms, more money for weapons, merging internal and external security plus the very aggressive rejection of migrants and refugees.”

“If we don’t want to live with the consequences of our action, then we would need a fundamental change in policy instead of more and more of the same erroneous approach,” she concluded.

Javier Couso MEP, Vice-Chair on the AFET committee, was also in no doubt as to which way the EU is heading with the CFSP:

“This report is based on a vision that is military and obsessed with security.”

“It doesn’t really look at the causes either. It celebrates increasingly aggressive tendencies towards the east (of Europe) and continuously calls for unilateral sanctions.”

“The CSFP increases military expenditure and leaves the EU directionless: no understanding of geopolitical changes whilst remaining a subordinate to economic and global interests,” he argued.

Irish MEP Lynn Boylan, meanwhile, described the entire project as “vain” and “ludicrous”. She also issued a stark warning that a militarised Europe is repeating the historical mistakes of the 20th century:

“We are all well-versed in the history of Europe and know what happened the last time it became extremely militarised.”

“Will the only difference be that this time the guns will be pointed outwards instead of in?” she wondered.

“This is a promotion of an EU arms industry whilst social expenditure has been slashed.”

“Reports like this are further evidence of the contempt for neutral member states by many in this Parliament and the European institutions,” she concluded.