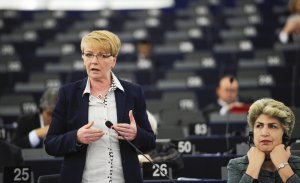 "We at GUE/NGL are democrats and whilst we respect the result of this presidential election, we are naturally disappointed by Antonio Tajani’s victory today."

"Our group has long been critical of the backroom deals and ‘Grand Coalition’ politics of the European Parliament. Today is no different, for, it was an agreement between the right-wing and ALDE's Guy Verhofstadt which have resulted in an EPP candidate becoming the new president.

Due to his past role in the European Commission which oversaw the ‘dieselgate’ scandal and track record on gender equality, we have long regarded Tajani - a founding member of Silvio Berlusconi’s Forza Italia party - as an unsuitable candidate for the presidency.

We therefore remind Tajani that as part of his new responsibilities as president, he must cooperate with other MEPs and political groups in this Parliament. That is of utmost importance to the democratic workings of our institution.

This presidential vote has been a watershed moment: it broke up the long-standing ‘Grand Coalition’.

We at GUE/NGL are deeply proud of our young candidate, Eleonora Forenza, whose energetic campaign focussing on providing an alternative voice on feminism, equal rights, justice and an end to austerity provided a breath of fresh air to European politics.

All of us at GUE/NGL look forward to working with other progressive forces in the Parliament because Europe - now more than ever - needs a strong voice on the Left to counter the rising right-wing populism."