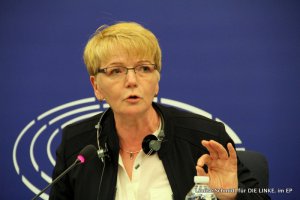 GUE/NGL MEPs have reacted angrily to plans by the Slovenian government to amend its Aliens Act which, if adopted by national lawmakers next week, would deny refugees the right to the protection to which they are entitled under international and EU asylum laws.

The proposals – under the pretence of public order and national security – aim to deny entry to asylum seekers arriving at the Slovenian border.

In addition, those who had entered the country ‘irregularly’ – even if they expressed the intention to apply for asylum – would be expelled automatically to the country from which they had entered Slovenia without any formal procedure; a process which constitutes illegal push-backs.

GUE/NGL President Gabi Zimmer, comments: "I call on the Slovenian government to respect international law and its obligations as a party to the European Convention on Human Rights."

"By limiting the right to asylum, Slovenia would even contravene its own constitution.

"To deny the fundamental rights of the most vulnerable people fleeing war, hunger or persecution is a dangerous way to try to gain public support.

"By sealing-off borders you do not solve problems faced by the refugees and migrants – you ignore them and waste time that could be spent on finding necessary solutions.

"It is shameful that more and more member states have adopted laws that breach international human rights law and deny asylum seekers access to protection.

"The inaction of the European Commission when it comes to respecting the rights of asylum seekers is equally shameful," added Zimmer.

Greek MEP, Stelios Kouloglou, also comments: “We cannot turn a blind eye to the rise in xenophobic practices in one EU member state after another."

"The right to asylum is undeniable and there is a legal and moral obligation for EU governments to safeguard the exercise of this right.

"The Slovenian government should reconsider their proposals and head in the direction of facilitating migration flows through the proper implementation of applicable international and EU laws, with the spirit of openness and solidarity,” Kouloglou concludes.