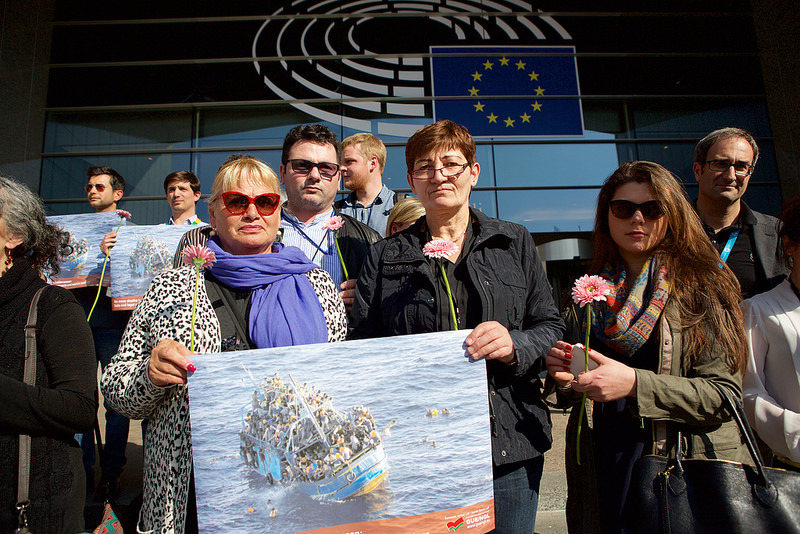 GUE/NGL MEPs have condemned the Commission’s recommendations to member states on returns of migrants issued yesterday ahead of the upcoming European Council meeting on the 9th and 10th of March.
The recommendations exclude alternatives to detention for migrants - making detention the only option to pursue - including for children. This policy increases the possibility of forced deportations, including for children, removing most safeguards and access to an effective remedy and encourages systematic roundup of migrants currently in the EU.
The proposals urge governments to put in place national legislation to allow for a maximum detention period of six months and for the possibility to prolong it until 18 months, making this the norm even in countries where detention is not employed such as Portugal.

"I am horrified at the stubborn manner in which the Commission, and in particular Mr Avramopoulos, cling to their failed asylum policy.”

“They go as far as saying that it could be in the best interest of children to be detained and then returned to a war zone.”

“At the same time, Avramopoulos talks about European values. He either has no idea what he is talking about, or has lost all sense of humanity," Ernst added.

Swedish MEP Malin Björk appealed to EU leaders for a complete reversal to the path being followed:

"I call on EU member states and institutions to show some human dignity. We could start by using some of the money spent on keeping refugees out of Europe - the building of fences and purchasing military equipment - to welcome refugees and asylum seekers to start a new life in Europe.”

“Depriving people of their right to seek asylum or locking up adults and children in detention centres is not the answer to the global refugee crisis.”

GUE/NGL MEP Marina Albiol pointed at the increased likelihood of forced deportations stemming from this policy:

"The Commission is condemning thousands of migrants to death, or to a life of misery. This proposal will facilitate deportations in a way that will make it impossible to safeguard or protect migrants and asylum-seekers.”

“It is important to highlight that the majority of vulnerable cases in Spain are granted asylum on appeal, including cases of women victims of trafficking. Based on the recommendations, none of these people would have been granted international protection and instead would have been deported following the rejection of their first application without any effective possibility of remedy."

"Viktor Orbán is completely right when he says that the EU as such is implementing policies on migration, repatriation and judicial arbitrariness which the government of Hungary has been implementing and proposing for years. European unity and the European Convention on Human Rights were established after the last war to abolish detention camps and restore the rule of law on the continent, but the camps and the violations of human rights are coming back.”

“Fundamental principles like non-refoulement and the best interest of the child are being surreptitiously perverted and negated. One of the most vicious Commission recommendations to member states is to ‘avoid repetitive assessments of the risk of breach of the principle of non-refoulement, if the respect of that principle has already been assessed in other procedures.’ We call on member states not to adapt their laws and constitutions to this shameful recommendation."

"This is a dark day for Europe, on the eve of the crucial elections in France, Italy, the Netherlands and Germany," Spinelli lamented.