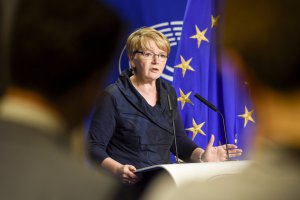 GUE/NGL group has announced that it has signed up to the European Parliament’s Joint Resolution on Brexit.

“We signed the Joint Resolution as we want to send a strong signal for the support of the peace process in Ireland and the rights of EU citizens in the UK and vice-versa.”

“We have a more critical point of view concerning the future of the EU. But during our fact-finding mission in border areas in Ireland last week, we saw with our own eyes the threats that Brexit poses to The Good Friday Agreement.”

“Therefore, we need a joint effort in the European Parliament to include the positive elements of this Resolution into the Brexit negotiations.”

“The upcoming month will be crucial for these negotiations. By joining the Resolution, we want to make sure that our positions will be heard during this process,” concluded Zimmer.

“GUE/NGL acknowledges and respects the sovereign right of member states to leave the EU.”

“Furthermore, we reject any kind of pressure or blackmail during the negotiation process for the UK’s withdrawal from the EU, and highlight that neither the triggering of Article 50 nor other dispositions in the Treaties should be used to create unwarranted obstacles to the implementation of a decision to leave EU,” he said.

“GUE/NGL believes that it is of paramount importance to swiftly provide legal certainty to nationals of EU member states living in Britain and British people living in other member states on the basis of reciprocity and non-discrimination.”

“Such rights should include, but not be limited to: the right of residence; the right to equal treatment; the right to access public services, including healthcare; the right of exportability of social security benefits, the right to family reunification; the mutual recognition of academic diplomas and professional qualifications including the continuation of Erasmus programs at their current level; mobility for students, academics, performers,” Ferreira added.

“Each member state should have a right to develop economic, political and cultural relations of their own choice with the United Kingdom, based on the principles of mutual interest, friendship between people and cooperation between sovereign states.”

“Brexit should not be used as a pretext to legitimise EU policies or to impose new federalist, neoliberal and militaristic drifts.”

“Brexit should be seen as a challenge to build another Europe. A Europe of cooperation between sovereign states with equal rights, of social progress and of peace is necessary and must be built with the agreement and participation of the people, always fully respecting their democratic rights and sovereignty.”

“We express our full solidarity to the Irish people and its struggle for the recognition and respect for their rights,” said Ferreira.