GUE/NGL President Gabi Zimmer's statement on the situation in Syria 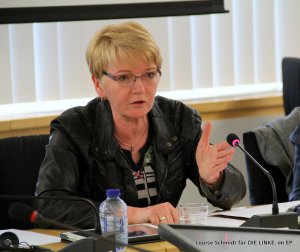 "GUE/NGL utterly condemns and is appalled by the use of chemical attacks on innocent civilians in Syria on Wednesday. Whilst we mourn the victims, we would also like to voice our opposition to the US air strikes on Syria overnight on Thursday. We call on the EU to condemn in the strongest possible terms the action of the US government and demand a halt to the escalation in violence at once. We call for an immediate ceasefire by all sides, and call on member states to refrain from supporting the unilateral action of a permanent member of the UN Security Council. Such action should be condemned rather than supported by member state governments in London and Paris."

"GUE/NGL's position is, and has always been, that dialogue is the only way to resolve the Syrian conflict. We call on the UN Security Council and other independent bodies to investigate claims of war crimes and the alleged use of chemical weapons. We urge all relevant actors to foster dialogue in order to bring about a swift and peaceful end to the Syrian conflict. Indiscriminate bombings neither resolve nor ameliorate the situation."