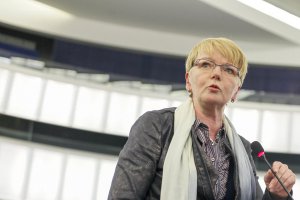 "We call on the Venezuelan opposition to engage in open democratic dialogue with the government and put an immediate end to its strategy of escalation."

"The European Parliament should support the dialogue and the peaceful solutions promoted by the government of democratically-elected President Nicolas Maduro, which are also supported by UNASUR, the Vatican and ex-presidents José Luis Rodríguez Zapatero (Spain), Leonel Fernández (Dominican Republic) and Martin Torrijos (Panama).

"We reject the proposed European Parliament's one-sided assessment of the difficult situation and proposed delegation to Venezuela. One-sided approaches from third parties can only fuel tensions and will not contribute to resolving the conflict."

"We insist on respect for the Venezuelan constitution by all parties and respect for human rights, including the right to freedom of peaceful assembly and expression.

"We reject any attempt to destabilise Venezuela, and call on all parties involved in the conflict to refrain from violence and further escalation of the situation. We also call on the European Union and the United States not to interfere in the conflict.

"We deplore that the head of the Organization of American States, Luis Almagro, spread a declaration against Venezuela which was not agreed upon by the organisation's members," Zimmer concludes."