MEPs grill Orbán and Timmermans on human rights in Hungary 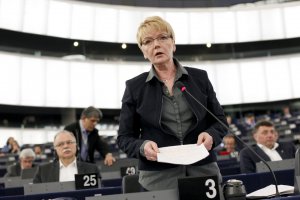 GUE/NGL MEPs confronted Hungarian Prime Minister, Viktor Orbán, and European Commission Vice President, Frans Timmermans, over the restrictions on universities, the parliament, the media and NGOs during the European Parliament's debate this afternoon.

"What do you mean when you talk about your 'proud Hungarian people'? Do you mean all the people who live in Hungary, including different ethnic groups such as Roma and migrants, all the people who work in your country? And do they have the same rights, are they treated equally and not discriminated against? This is the key question I would like to ask you first."

"You have made a law that is directed solely against the Central European University. Is this about freedom of access to study and research, or is it about cheap political gains for you?

"If I am not mistaken, you personally received a grant from Soros to attend Oxford University. Therefore, I am surprised by your hypocritical approach to his university in your country.

"It's not only us here in the European Parliament who are criticising this; 80,000 of your own citizens have protested on the streets in Hungary. That’s why we are appealing to you to ensure that their rights are respected."

"With your model of illiberal democracy, step by step you are systematically reining in all counter powers including the media, the justice system, the education sector and NGOs."

"Your 'Let's stop Brussels' survey is like a caricature and your law of suspicion over NGOs is directly inspired by the equivalent law in Russia."

"When it comes to refugees and migrants, lies, half-truths and scapegoating reign across your country. It is questionable whether the right to asylum still exists in Hungary amidst the systematic detention of asylum seekers including children, the electric fence along the Hungary-Serbia border, and even snipers along the borders!"

"After the Commission did nothing about any of this since 2015, I'm glad that you have finally initiated an infringement procedure against Hungary and that we will vote on a resolution in the next plenary session. This is the least we can do about it."