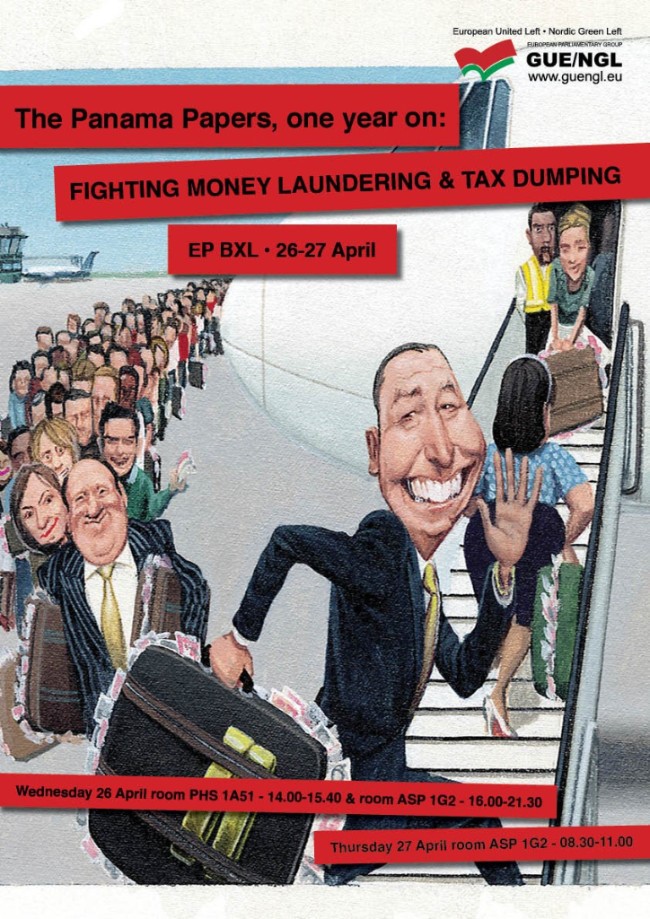 A two-day event on the growing international movement against tax havens and the persistent problem of money laundering and tax evasion has been held by GUE/NGL political group at the European Parliament this week.

‘The Panama Papers, one year on: Fighting money-laundering and tax dumping’ was a part-conference, part-public forum which featured relevant guests from NGOs, governments and intergovernmental organisations. They shared the platform with journalists, trade unions and MEPs to discuss the current situation and exchanged views on how to continue mobilising for tax justice.

One of the main purposes of this event was to provide left-wing political parties throughout Europe and Latin America an opportunity to discuss with NGOs and trade union representatives that are leading this battle.

Renowned HSBC whistleblower Hervé Falciani took part via video conference. During his segment, Falciani revealed that in addition to the problem of whistleblower protection, there was also a limitation to the use that different jurisdictions can make of leaked information thanks to confidentiality clauses that do not allow tax authorities to prosecute cases with information obtained from a whistleblower.

Participants also heard about the various international initiatives such as those led by Ecuador in the empowerment and democratisation of the United Nations' committee tasked with international tax cooperation; Bolivia's Plurinational Legislative Assembly Inquiry Committee on the Panama Papers; the South Centre's initiative on an Inaugural Annual Forum on Developing Country Tax Policies and Cooperation for Agenda 2030; and Country-by-Country Reporting, amongst others.

Miguel Ongil, a parliamentarian from the Region of Madrid for the Podemos party, described the current situation thus:

“Capitalism is putting itself at risk by allowing tax havens to obstruct market competition.”

Amongst the GUE/NGL MEPs from the European Parliament’s Committee of Inquiry into Money Laundering, Tax Avoidance and Tax Evasion (PANA) who took part included its Vice-Chair Fabio De Masi. He commented after the event:

"The conference was a success. It provided a forum for experts, the public and politicians to meet and exchange views on this important issue. I'm sure that the conference will help us in our struggle for greater tax justice by forging a stronger international network."

“It’s worth highlighting just how important the two-day GUE/NGL event on fighting tax evasion and money-laundering has been this past week. We had key contributions from panellists who, on the one hand, explained the link between tax evasion and tax havens whilst, on the other, demonstrated the deterioration in public policies and public services as we struggle for tax justice.”

Danish MEP Rina Ronja Kari - who chaired the panel discussion on tackling money laundering and tax evasion and avoidance from a left perspective - is also in no doubt as to how serious the situation is:

“Tax evasion costs member states billions each year - money which should have been spent on welfare and for public use instead. The EU rules on free movement of capital only promote this development. It must be stopped,” she said.

Stelios Kouloglou agrees and describes the task ahead:

“It's one of the biggest political battles that we have to fight in the upcoming period,” surmised the Greek MEP.

“The action of the Argentinian prosecutors against the offices of BNP which promoted the capital flight of rich Argentinians ought to set an example to the EU tax administrations, as well as the European Public Prosecutor's Office that we have just launched.”

Finally, Portuguese MEP Miguel Viegas says that armed with the newfound knowledge and expertise from this conference, the political left is more than ready for this fight:

“We left this meeting stronger and more aware of the level of struggle in each member state. However, we also leave with more responsibilities and with the obligation to work harder and better, helping to build networks between progressive and left forces fighting fraud and tax evasion, mobilising the people and the workers in all European countries,” he concluded.