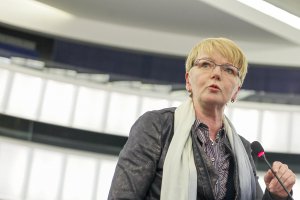 “On behalf of everyone at GUE/NGL, I would like to send our sincerest congratulations to our friend and colleague, Jean-Luc Mélenchon, on his and la France Insoumise’s successful election to the French National Assembly on Sunday.”

“We also send our warmest congratulations to our comrades at the Parti communiste français (PCF) on increasing their number of seats in the vote.

“These elections witnessed the lowest turnout ever by French voters, with many choosing instead to abstain. But with the record number of seats won by President Emmanuel Macron’s La République en Marche, strong opposition voices that will stand up to Macron’s plans for the EU and French workers’ rights are now needed more than ever.

“The woeful results by the far-right have underlined once again that their xenophobic, Islamaphobic fearmongering have been rejected by the French electorate and have no place in our society.

“GUE/NGL vows to continue our support for la France Insoumise and the PCF against the planned attacks on labour rights, and we stand with all progressive social forces that will be taking to the streets against the Macron plans.

“GUE/NGL thanks Jean-Luc for his contribution and involvement over many years, and we wish la France Insoumise and the PCF all the very best in the years ahead.”