New Commissioner for digital economy an improvement on hapless Oettinger 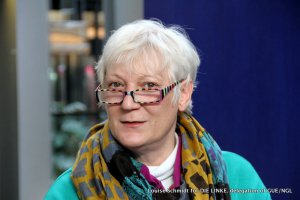 Mariya Gabriel, Bulgaria’s Commissioner-designate was grilled by MEPs earlier this week to see if her skills and suitability match up for the Digital Economy and Society portfolio.

If approved, she will succeed the much-maligned Günther Oettinger whose tenure as Commissioner has been dogged by incompetence and scandals.

Gabriel, nominated by Commission President Jean-Claude Juncker, will be responsible for overseeing the digitisation of the European industry, how to deal with cyber-attacks, the future of the Body of European Regulators for Electronic Communications (BEREC), the EU’s radio spectrum allocation and the different regulatory and fiscal aspects of online platforms.

GUE/NGL MEPs were at the forefront of the hearing encompassing contribution from the Industry, Research and Energy (ITRE) and Culture and Education (CULT) committees, as well as others from the Internal Market, Legal Affairs and Civil Liberties committees.

Commenting on his thoughts of the Commissioner-designate, GUE/NGL Co-ordinator on the CULT committee Curzio Maltese is reserving judgement on Gabriel’s competence - for now:

“We will give her a chance to bed in to her post before making any judgement. Given the track record, I remain sceptical as to how much an incoming Commissioner will deviate from the official position on the digital single market which we at GUE/NGL don’t agree with at all.”

“The general position of the Commission is to complain and do nothing. Instead, we should get down to business and ask the Commissioner-designate specific and tough questions about the policies.”

“As an ex-MEP, she knows GUE/NGL’s position very well in the upcoming battles over competitions and the self-regulation of online platforms.  She therefore at least understands the sensitivities of the Parliament better than her predecessor, Günther Oettinger,” said Maltese.

Also reserving judgment for now is German MEP Martina Michels, who sits as a substitute on the CULT committee:

“My first impression is that Gabriel is infinitely better than Günther Oettinger though that is not exactly hard.”

“She had at least done her homework prior to the hearing and that she does seem to have her own view on the digital society but mainly focussing on the digital single market.”

“However, she was very weak and evasive when answering my questions on copyright law. She said that updating the copyright law would make research, education and inclusion better and more accessible. But she had no answers on how this would affect cultural institutions such as museums and archives, library collections and media archives.”

“Gabriel, like the European Commission, seems to see the basic principles of a digital society such as net neutrality and data-protection through the prism of the digital single market. This approach is contradictory and is anything but holistic,” argued Michels.

From ITRE committee, Portuguese MEP Marisa Matias is also sceptical that much will change under Gabriel’s tenure:

“Politically, I don’t agree with her but I know she is open to working with every group - as she and I had done in Mashreq in the Parliament.”

“Under questioning on online platforms like UBER and Airbnb, she gave concrete answers over the legislations. She wanted a fair competition between online and offline platforms.”

“But based on past experiences, I know she will do exactly what she says. I am therefore doubtful that she’ll take a different position from the Commission and she will just follow the mainstream,” said Matias.