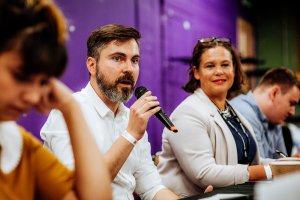 On the 7th and 8th of July the leaders of the world’s largest economies are gathering in Hamburg, Germany for the annual G20 summit. The priority issues on the agenda are climate change, migration and free trade.

GUE/NGL MEPs are expected to join thousands of others to protest controversial world leaders such as Trump and Erdogan and the policies they represent, which have fuelled conflicts, inequality and environmental degradation around the world.

Speaking in this morning’s plenary debate with Commission First Vice-President Frans Timmermans and the Estonian Presidency of the EU, GUE/NGL MEP Fabio De Masi warned the leaders of the G20 against the disastrous path they are taking:

“Tax refugees are the most expensive refugees.  Up to 30 trillion dollars are stashed away in tax havens. About eight people, according to Oxfam, own as many assets as half the world's population. That’s a sick reality.”

“We need public investment in housing, schools and universities. However, the negotiations in the EU on a blacklist of tax havens have led to diplomatic horse trading. We need to levy punitive taxes on financial flows into tax havens - both inside and outside the EU,” De Masi urged.

“The wars in the Middle East from Afghanistan to Iraq, Libya or Syria have created chaos, state collapse, terror and flight. It’s not just bombs that have decimated Africa but also free trade agreements, such as the agreement the EU is pursuing with Japan, following TTIP and CETA.”

“Arms exports, cronyism with the godfathers of terror such as Saudi Arabia and Erdogan - the EU’s bouncer - have propped-up the Islamic state. But the G20 is now discussing military interventions against refugees and further lazy deals with Turkey and Egypt,” the German MEP continued.

MEP Fabio De Masi, a Hamburg native, criticised the whole premise of a G20 summit, saying that these debates belong to the democratic forums of the UN:

“The G20 summit will meet in Germany’s most beautiful city. Nevertheless, many will leave the city when Trump or Erdogan visit us. Hamburg - the gateway to the world - will be like an exclusion zone so that protesters do not trouble the heads of state. We do not like shutdowns in Hamburg - as the world-famous Reeperbahn proves every night.”

“Of course, heads of state should talk to each other, particularly in crisis periods. But the G20 is negotiating the fate of the world. These debates therefore belong to the United Nations in New York. Then Mr Trump wouldn't have to be far from his golf course.“

“Many people will peacefully take to the streets to protest against these policies. GUE/NGL MEPs will join me and others in Hamburg to call for a just and more equal world,” De Masi concluded.