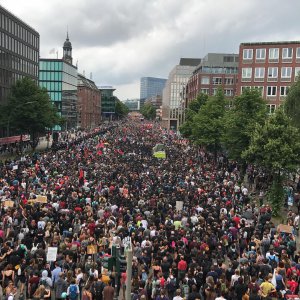 GUE/NGL condemns the unjustified arrest of Italian MEP, Eleonora Forenza, during the peaceful protest outside the G20 meeting in Hamburg this weekend.

"Eleonora was part of a peaceful protest and was arrested with 14 others for no specific reason. She was detained for five hours and then released without charge."

"It is unacceptable that an MEP, or anyone else, would be arrested and detained for no reason.

MEP, Eleonora Forenza, explains her experience: "They told us we were in a state of detention without giving us the reason. They told us only that they had news of dangerous Italians coming to Hamburg."

"They seized our documents including my parliamentary ID card for hours. They searched our bags and found nothing.

"The police also teased us when we asked for information and even made me go to the toilet with the door open while watched by two policemen even though I had already been searched.

"They continued to keep us in detention even though I called the Italian consulate and they contacted the police explaining that we had not committed any crime and that there was a parliamentarian among us.

"After I was released - because I am an MEP according to the police - I stayed at the police station in solidarity with the others who were detained. I would not leave until they released the other 14 people who were arrested with me.

"I could not even take photos because I was continuously watched by the police," Forenza concludes.