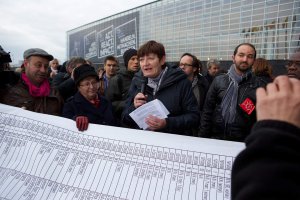 Some GUE/NGL, Greens/EFA and ALDE MEPs have signed a letter today to the European Commission and the European Council, regarding the series of extremely worrying immediate measures to be taken by the EU Member States, the Commission, EU Agencies and Italy under the action plan.

The measures in the action plan include more third-country deals, more readmission agreements and more harassment of NGOs conducting search and rescue operations, with the aim to prevent asylum seekers from arriving in Europe.

GUE/NGL Coordinator on the Civil Liberties, Justice and Home Affairs Committee, Cornelia Ernst, explains: " The measures proposed by the Commission in this action plan will inevitably lead to a violation of human rights."

Addressing the process involved in developing the action plan, Ernst continues: "Once again, the European Commission has been circumventing European Parliament's role. This has to stop. "

"Instead of fuelling far-right political views and rhetoric, we urge both the European Commission and the European Council to make sure that proactive European search and rescue operations take place and provide safe and legal pathways for both asylum seekers and migrants," she concludes.