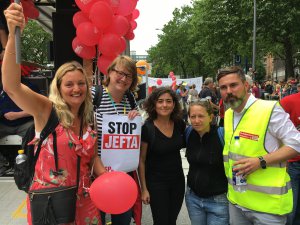 In a letter to the President of the European Parliament, Gabi Zimmer has called for an investigation into, and an apology for, the unlawful detention of MEP Eleonora Forenza during the peaceful protest at the G20 meeting in Hamburg.

GUE/NGL President, Gabi Zimmer, explains: “Today I addressed a letter to the President of the European Parliament and to the Chair of the Legal Affairs Committee in order to demand an official investigation into the arrest of GUE/NGL MEP, Eleonora Forenza, during the G20 protests in Hamburg.”

“On July 8, German police forces arrested and detained Italian MEP, Eleonora Forenza, together with her parliamentary assistant and some other Italians, after they had peacefully participated in a demonstration as part of the G20 protests.

“Ms Forenza took part in a mission on behalf of the GUE/NGL group acting as an observer of the protests within the framework of her mandate.

“The police officers ignored her rights and immunity as an MEP and detained Ms Forenza for hours without charge and without explanation.

“This is an unacceptable breach of MEP Forenza’s rights, a breach of European law and an offence against the democratically elected representatives of the people in the European Parliament.

“We demand full clarification by the German authorities on the police forces’ unlawful action and an official apology,” Zimmer concludes. 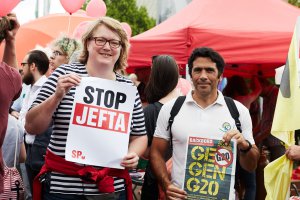