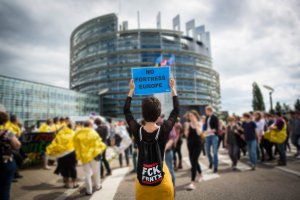 The Italian authorities seized a rescue ship - Iuventa - operated by German NGO Jugend Rettet on the Italian island of Lampedusa. The ship was used to save the lives of refugees and migrants attempting the dangerous sea journey across the Mediterranean from North Africa.

“The code of conduct violates Italy’s international law obligations and compromise the neutrality of sea rescue missions. We strongly criticise the arbitrary actions of the Italian authorities against NGOs operating rescue efforts in the Mediterranean under already difficult conditions.”

“We call on the EU and member states to open safe and legal migration routes and to stop defaming and criminalising sea rescuers. Sea rescue is not a crime,” Zimmer added.

"The political attacks and police repression against rescue NGOs operating in the Mediterranean Sea are absolutely unjustified and create a society based on fear and hate, a society of ‘us vs. them’, and open the doors to fascism.”

“The actions of EU member states are criminal as they condemn to death thousands of people who are fleeing persecution and are searching for a better life for them and their families.”

“I would like to express my support for Jugend Rettet and all of the rescue NGOs and pay tribute to their work,” Juaristi stated.

GUE/NGL has called on member states to support Italy in dealing with the crisis. More resources should be dedicated to saving lives instead of militarising the Mediterranean. Member states must accelerate resettlement schemes and sharing of the burden.