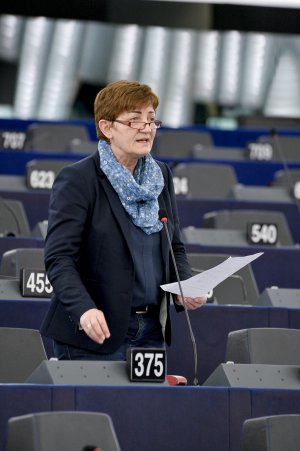 President Trump´s threats to renege on the Iranian nuclear deal, brokered with support from the EU, and the countrywide protests in Iran were debated at the European Parliament today, with MEPs expressing concerns about the violent crackdown.

The Iranian nuclear deal allowed for sanctions to be lifted on Iran and averted a military confrontation but it is now in danger due to Trump´s polarising rhetoric. Meanwhile, more than 20 people have been killed in Iran and hundreds arrested after spontaneous protests erupted in the east of the country against the cost of living and high unemployment.

“We mourn for the lives lost in the demonstrations because of legitimate demands for better living conditions, employment, a clean environment and against price rises. The deaths must be investigated so that families see justice.”

“We share President Rouhani´s view that protesters have the right to demonstrate. Instead of calls for the death penalty, all those arrested must be immediately released.”

“The power struggle for the future of Iran has begun a long time ago. The situation can only improve when the country opens up. Now there is an opportunity, but it cannot be imposed from the outside nor by a crazy US President.”

The German MEP urged the EU to continue its dialogue with Iran on reform and human rights:
“Germany, France, the UK and EU representatives made the right decision to stick to the nuclear agreement with Iran because of its commitment to the deal and because we want an end to a nuclear arms race in the war-torn Middle East. We do not want to have to renegotiate a new agreement.”

“Iran no longer needs sanctions but concrete reforms on the social, economic and political fronts that are an alternative to a policy of chaos.”

Greek MEP Sofia Sakorafa argued against the instrumental use of human rights to undermine the nuclear deal with Iran:

“Respect for human and civil rights are non-negotiable EU constitutional principles and it is clear that Iran has a long way to go in this regard. We strongly condemn the violence that we witnessed over the past few days in Iran.”

“However, the Parliament must in no way ´assist´ those who deliberately use these principles to undermine the nuclear agreement with Iran, when the International Atomic Energy Agency has repeatedly certified that all commitments have been respected.”

“I'm glad Mogherini clarified the EU´s stance to Iran's foreign minister last week. Europe has to pursue an autonomous foreign policy to balance the devastating US policy, which seems to be heading from ´America first´ to ´America alone´.”

GUE/NGL MEP Miguel Urbán condemned the repression and those who seek to exploit the situation for their imperialist ambitions:

“We fully condemn the repression of the protests in Iran that arise from the neoliberal policies of a regime that has impoverished millions of people. An economic situation that has been aggravated by the sanctions imposed by the US and the European Union, creating suffering for the civilian population. We want to make clear our support for these popular mobilizations, their demands, freedom of expression, and democratic aspirations.”

“But it is also essential to remember that the EU must respect Iranian society. We must not allow their instrumentalisation by Trump or by anyone else, imposing their imperial agenda that has nothing to do with the demands of Iranians.”

Spanish MEP Javier Couso warned of chaos due to outside interference:

“We support the fair demands of the workers in Iran against neoliberal policies that have impoverished a large part of the population. Policies such as cuts in subsidies have led to a very justified fight for better conditions.”

“But we know that not everyone wants to improve the situation of the Iranian people, similar to what we saw in Libya and Syria, leading to chaos. Interference from US and Saudi Arabia aims to divert peaceful demonstrations to other ends. We urge the government of President Rouhani to respond to the demands of the people and to not repress calls for social reform,” Couso concluded.