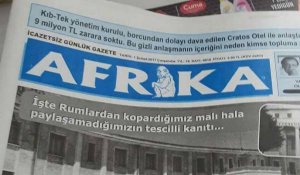 The GUE/NGL group denounces the attacks against Afrika newspaper, Sener Levent and its staff in the occupied areas of the Republic of Cyprus organised by extreme nationalist forces. We express our solidarity with the newspaper and its staff, as well as with the Turkish Cypriot progressive forces that oppose these attacks.

It is with deep concern that we learned of a hate campaign being orchestrated against Afrika newspaper and its editor, Sener Levent by Turkish President Erdoğan. The inciter Mr Erdoğan urged his supporters in the occupied areas of Cyprus to act and adopt measures against Afrika which had recently compared Turkey’s ongoing military operation in the Syrian villages around Afrin with that of Turkey’s military presence in Cyprus. Erdoğan’s rhetoric and actions further highlight yet more troubling ways in which Ankara tries to further impose itself on the Turkish Cypriot community and to transfer its internal problems and authoritarianism to Cyprus.

A few days ago, settlers aligned to Turkey’s Justice and Development Party (AKP) along with several far-right elements gathered outside Afrika’s offices, threatened to lynch the paper’s journalists, threw rocks and broke the office windows. They also destroyed the newspaper sign which hung outside the building as the mob tried to break into the office. We cannot stay silent in the face of such unacceptable acts that violate human rights and freedoms. They also constitute an attack on the efforts to solve the Cyprus problem. We expresses our solidarity with Sener Levent and his staff at Afrika. They have been targeted simply for daring to compare Turkey's invasion of Cyprus with that of Turkey's ongoing operation in Syria.

By taking into account the urgency of this issue, we expect the European Commission to denounce the attacks and express its support for Afrika and its editor. A letter has already been sent to President Jean-Claude Juncker expressing our concerns, and he must take immediate steps to protect the newspaper and its freedom of expression.