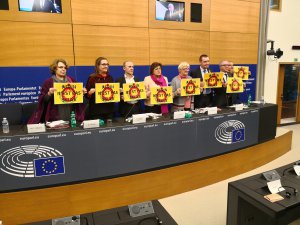 The deteriorating human rights situation in Turkey and its military invasion of Afrin came under intense scrutiny at the European Parliament today amidst the rising death toll in north-western Syria.  MEPs expressed concerns about the ongoing state of emergency and Ankara´s continuous repression against the Kurdish population.

For months now, the Turkish government has purged scores of opposition members, especially the HDP, judges, teachers, journalists and NGOs.

Since mid-January, its army has also embarked on a military offensive to crush Kurdish forces in north-western Syria.

GUE/NGL MEP Takis Hadjigeorgiou condemned these actions and affirmed his support for the Parliament’s resolution urging Turkey to respect the rule of law and human rights:

"The situation in Turkey is deteriorating whilst the constant state of emergency has dealt a heavy blow to the country’s democratic institutions. The proposed resolution adequately describes the worrying situation in the country. We express solidarity with the leaders of the HDP who are currently in prison, and we oppose the expulsion, imprisonment and replacement of the 68 Kurdish mayors with state-appointed officials.”

Meanwhile, French MEP Marie-Christine Vergiat questioned the wisdom of the Turkish campaign in Syria and the EU´s lack of a proper response:

“Thousands of people are languishing in prisons without charge or access to a lawyer. There are also reports of torture. Officials, lawyers, magistrates and human rights defenders are bearing the brunt as shown by the targeting of journalists from Cumhuriyet and staff at Amnesty International. However, minorities - particularly the Kurds - have suffered the most.”

“The intervention in Syria has been used as an excuse to reinforce the state of emergency and harden the crackdown. Does the rule of law, human rights and international law still mean anything in the EU?” she queried.

Finally, German MEP Martina Michels called for an end to the state of emergency and Turkey´s intervention in Syria:

“Recep Tayyip Erdoğan's emergency decree 696 - granting impunity to political violence - marked the conclusion of the constitutional review heralded by the 2016 coup attempt.  Mob justice is legal but peaceful protest, political opposition and media criticism have been outlawed. Teachers and scientists are also being targeted.”

“Tens of thousands have already been expelled from their homes in Cizre and Diyarbakır - long before the state of emergency had come into force. Now that Turkey has launched a military intervention in Syria, where are the condemnations from the EU, NATO and Russia?”

“A peaceful solution to the Kurdish issue would improve the human rights situation throughout the region. Instead of dirty deals on refugees and arms sales, what the region needs are humanitarian aid and an end to war,” Michels concluded.