Political participation must be upheld in upcoming Colombian votes 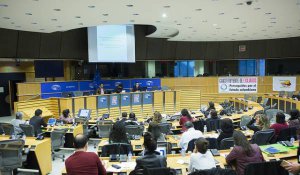 GUE/NGL held a conference on the peace process back in March 2017: 'Colombia after the Havana Agreements: Paving the road to Peace' in the European Parliament in Brussels

Colombia will be holding two significant elections in the upcoming months: the legislative vote on 11th March for the Senate and House of Representatives, and the presidential election in May. These will be the first votes since the signing of the peace agreement between the Colombian government and FARC, the latter having since become a political party and given up its arms.

However, FARC-affiliated candidates have endured all kinds of harassment and provocation since the start of the electoral campaign. Two of their former fighters were murdered on 16th January, and the political group’s party headquarters have also been threatened. In total, 54 former fighters and 70 community leaders have been murdered since FARC renounced its weapons.

It is for these reasons that, regrettably, led to FARC suspending its campaign. But it is worth reminding ourselves that political participation was a critical part of the original peace agreement. Without it, there would have been no peace accord.

GUE/NGL thus defends that the exercising of electoral rights and democratic participation in Colombia as crucial for upholding the peace agreement. GUE/NGL underlines that it is an obligation of the Colombian government to fight against all violations of fundamental rights and freedoms, and to demand the country’s security forces to fully exercise their functions to assure those rights and freedoms.

GUE/NGL calls on EU member states to further diplomatic efforts with the Colombian government to ensure the full implementation of the peace agreement, and to guarantee security in the country for all political forces and social movements.