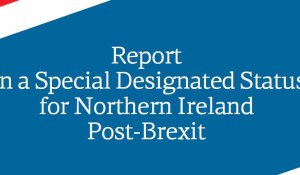 The North of Ireland must be granted special designated status post-Brexit, according to a new study launched today by GUE/NGL.

Authored by Dr Nikos Skoutaris, a senior lecturer on EU law at the University of East Anglia in Britain, the report underlines that given the North’s special and unique circumstances, it is critical that it remains as part of the EU after Brexit.

It also argues that the rights to self-determination by the North of Ireland must be respected, and that the North’s economy has the right to be reintegrated into the EU as part of the single market.

"This independent report, commissioned by GUE/NGL and carried out by a respected expert in EU law, confirms what we have been saying since the Brexit referendum: that the North needs to secure special designated status within the EU.”

"I welcome this report and think that is it entirely appropriate that we are launching it in Derry today, given its location on the border will be amongst the areas most hit by Brexit,” she said.

"This report, following on from others, shows that special status is possible and is necessary to protect our rights, our economy and the Good Friday Agreement.”

"There is a willingness in the EU for special status and we must now make sure that it is delivered," she added.

The report is being launched at 11am-1pm today at the Main Lecture Theatre, Magee campus teaching block at Ulster University in Derry, Ireland. Joining Anderson for the Q&A session will be Dr Skoutaris, the International Conflict Research Institute’s Brandon Hamber, and broadcaster and commentator, Brian Feeney.

You can read the full report by Dr Skoutaris here.