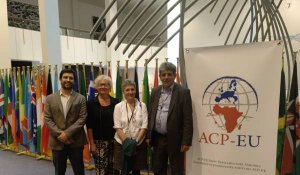 Today, MEPs and their counterparts from 78 African, Caribbean and Pacific (ACP) countries completed a three-day ACP-EU joint parliamentary assembly to define the future of their partnership.

The Cotonou agreement, the treaty between the EU and ACP countries, will expire in 2020. In addition to debating the treaty’s renewal (also known as the post-Cotonou agreement), other topics on the agenda included migration, terrorism, population growth and the humanitarian crisis in South Sudan.

“The future of the EU-ACP relationship must be based first and foremost on respect for the independence and sovereignty of states, and respect for the will of the people. The legacy of centuries of oppression and colonial domination has not disappeared and remains alive in current relations.”

“Instead of seeking to export models of state and economic governance, the EU must respect the legitimate choices and priorities of ACP countries. Instead of seeking to perpetuate relations of dominance and subjugation, with instruments such as the so-called Economic Partnership Agreements (EPAs), the EU must recognise the specific needs of ACP countries and the negative impact of liberalisation and deregulation of international trade on them. Instead of trying to divide and rule, the European Union must respect the unity and cohesion of the ACP countries.”

“Partnership agreements should be adopted on an equal basis and for mutual benefit.”

“The post-Cotonou agreement must specifically focus on development in the ACP countries. This means in particular that the EPAs must no longer be part of the agreement, since they are an instrument for flooding the markets of partner countries with highly subsidised European agricultural products at the expense of local production.”

“Further, they are an instrument for the EU to secure a cheap supply of raw materials and at the same time continue to prevent the development of domestic manufacturing in ACP countries.”

“EPAs are part of a neoliberal and unfair world and economic order. The Global South is ruthlessly exploited by industrial nations, their environment is being destroyed and people are starving and forced to leave their homes. Hunger is also a form of war against the people!”

MEP Neoklis Sylikiotis (AKEL, Cyprus) saw the assembly as an opportunity for forging true solidarity between the peoples:

Finally, MEP Lidia Senra (Independent, Galicia) lamented the dominant view in the EU bureaucracy about the value of such a relations:

“Regrettably, the European Union is more concerned about consolidating an agreement that perpetuates the plundering of natural resources, fishing stocks, land grabbing and the markets of the ACP countries than to reach an agreement that guarantees their sovereignty and sustainable development,” Senra concluded.