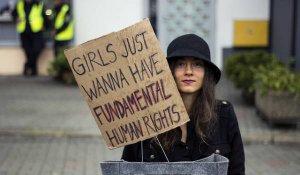 The Polish Prime Minister has come under heavy criticism in the European Parliament today with the Left laying into his government for dragging the country further to the right, and rowing back on civil liberties and basic human rights.

In particular, Mateusz Morawiecki was slammed for undermining the independence of the judiciary, and for depriving women of their sexual and reproductive rights.

Yesterday, the European Commission opened an infringement procedure against Poland for breach of EU Treaties and the Charter of Fundamental Rights of the Union over Supreme Court reforms.

GUE/NGL’s Tania González Peñas (Podemos, Spain) spoke on behalf of the group in the ‘Future of Europe’ debate, and she lamented that after numerous Parliamentary resolutions against Poland’s transgressions, the situation remains dire:

“The Morawiecki government is adopting ultraconservative, xenophobic and misogynist reforms that annihilate democracy and freedom in Poland.”

“Is this what Morawiecki wants for his country - to go down in history as the Prime Minister that destroyed institutional independence, the rights of women, of immigrants, the LGTBI collective, the right to assembly, the functioning of NGOs,  the freedom of expression and freedom of the media?”

Gonzalez also rebuked Poland’s refusal to take part in the 2016 relocation plan for refugees, and blamed PM Morawiecki’s policies for helping to fuel social conflict - highlighted by the latest infringement of women’s sexual and reproductive rights which prompted mass protests in the country this week:

“On Monday, a new anti-abortion law that will further limit access to legal and safe abortion was debated in Poland. Morawiecki cannot keep playing God with the lives of Polish women and he must listen to them - even if the Catholic Church objects!”

“GUE/NGL stands in solidarity with all those who are fighting for democratic, civil and sexual liberties in Poland. We urge the Commission to exert concrete and effective sanctions that will redress the government’s authoritarianism.”

“This is because we believe in a Europe where the most basic of human rights are undeniable and will be unquestionably upheld,” she concluded.