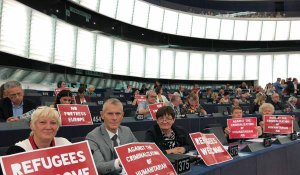 The alarming policies pursued by the far-right Austrian government has been roundly condemned by Left MEPs at a debate on the country’s upcoming EU presidency, with one branding Chancellor Sebastian Kurz “baby-faced Orbán and Salvini” - the latter name in reference to the hard-line Italian interior minister.

Under Kurz’s proposals with the far-right Freedom Party, migrants and refugees will not be accepted by Austria, with social and labour rights also massively curtailed and EU solidarity confined to one side.

Opening the debate on behalf of GUE/NGL, Neoklis Sylikiotis MEP (AKEL, Cyprus) chided the Austrian presidency’s slogan ‘An EU that protects’ as scaremongering and a threat to social cohesion.

“As GUE/NGL, we say that refugees and the migrants are not a threat to the EU. Wars and imperialist interventions that the EU and member states support are the real threats. The rising economic and social inequalities, and increasing racism and xenophobia are the real threats.”

“We demand the immediate abolition of the Dublin agreement and the creation of legal and safe routes for the refugees. All member states should be receiving refugees based on their capacity and the principle of solidarity.”

Sylikiotis then offered support for all Austrian workers whose labour rights are being threatened by Kurz’s plans to increase their working hours from 40 to 60 per week:

“We stand in solidarity with all the Austrian workers - 100,000 of whom participated in Saturday’s demonstrations in Vienna to protect their eight-hour work day and against their government’s decision to prolong the working hours to 12 hours a day, or up to 60 hours per week. For social cohesion and real solidarity, we remain steadfast in our position for a social Europe,” he concluded.

“Instead a manifesto of hope, I see a rhetoric of fear.”

“He needs to cooperate with the Parliament and the Commission in order to come up with solutions for the new MFF, Brexit, migration, asylum policies and social agenda.”

“Does the Chancellor want to be remembered as a European centre-right leader or as a baby-faced Orbán or Salvini?”

Finally, Czech MEP Kateřina Konečná (KSČM, Czech Republic) concentrated on Brexit and the MFF in her contribution to the debate:

“The Austrian Presidency will feature the culmination of the Brexit talks. On the one hand it can be very simple but on the other, it contains fundamental questions that remain to be solved.”

“Likewise, the MFF will require a lot of effort from the Austrian Presidency and the negotiations will expose all the self-interests within the EU,” warned Konečná.