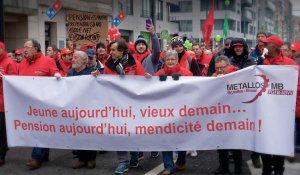 When Commissioner Valdis Dombrovskis announced a proposal to create a Pan-European Personal Pension Product (PEPP) in 2016, it followed calls from global investment firm, BlackRock, for the EU to create a cross-border pension fund.

Dombrovski’s announcement of the PEPP gave the clearest signal yet of what the Commission wants to do with EU citizens’ pensions - privatise them.

GUE/NGL’s decision to designate its Topical Debate this week in the European Parliament’s plenary session as ‘The future of pensions: fighting privatisation and strengthening public universal social security systems’ is thus a timely reminder why such plans would be catastrophic for millions of EU citizens.

“The implementation of a Pan-European Personal Pension Product responds to a longstanding demand from large investment funds for the appropriation of workers' contributions to public social security.”

“The implementation of such EU recommendations has led to an accelerated process of weakening public social security with obvious and harmful consequences: attacks against the right to social protection; the introduction of measures that erode the financing base of these systems - especially disadvantaging the elderly, unemployed workers and non-contributory social benefits,” he argued.

Pimenta also made a staunch defence of the importance of social security, and accused the Commission of selling out the public by kowtowing to the banking vultures:

“Public and universal social security should serve the interests, well-being and happiness of the workers and people. Its defence and reinforcement are fundamental to building a more just and supportive society in another Europe based on social progress and convergence,” he concluded.

“Thinking that the capital market can somehow pay for your retirement, it’s like entrusting your life savings to a gambler who promises to lodge it for you in the nearest bank. Of course, what he doesn’t tell you is that there’s a casino on the way there....” he said.

Meanwhile, Greek MEP Kostadinka Kuneva (SYRIZA, Greece) voiced her suspicion about certain MEPs’ desire for the PEPP proposals to go straight to trilogue with the Council, thus bypassing scrutiny at the parliament:

"Remember Lehman Brothers’ collapse ten years ago and how they concealed the true extent of the situation from customers who thought their pension was safe with the bank? It’s baffling that people still think the markets can guarantee the future of their pensions.”

“We are already seeing it in Greece where the opposition party have proposed private pensions like Pinochet did in Chile!” she said.