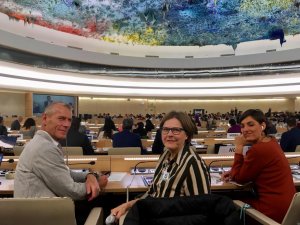 Last week in Geneva, the EU’s representatives at the negotiations for a United Nations Treaty on Business and Human Rights have failed to genuinely support the development of the treaty, including failing to even show up to one of the sessions.

German MEP, Helmut Scholz (Die Linke), who was present during the meetings in Geneva last week, explains: “The EU representation did not participate - was not even present in the room - during a long debate among the states involved on the proposed conclusions and recommendations from the negotiations.”

“Moreover, after that debate the EU representatives returned to the room and disassociated themselves from the conclusions and recommendations, and stated that they are not bound by them."

Following the EU representatives’ dubious role in previous negotiating sessions for the treaty, the European Parliament adopted a resolution earlier this month calling on the EU’s representatives to “engage genuinely and constructively in these negotiations”.

A delegation of MEPs went to Geneva last week during the negotiations to support the treaty development process and to ensure accountability of the EU’s representatives.

Spanish MEP, Lola Sanchez (Podemos), who was also present in Geneva comments: "After witnessing the deplorable role played by the EU, it is clear that we are entering a new phase in which we must work harder than ever to ensure that the European External Action Service and the European Commission are working in alignment with the European Parliament's position. It is now a matter of democratic legitimacy and respect for European values."

Dutch MEP, Anne-Marie Mineur (Socialistische Partij), who was also present, describes the steps that are required to ensure that the binding treaty becomes a reality: "We must encourage our colleagues in the national parliaments to advocate the urgent need to adopt a binding treaty that surpasses the deficits of the current trade model, which provides impunity to transnational corporations, to the governments of the Member States.”

Despite this very disappointing behaviour from EU representatives, the negotiations for the binding United Nations Treaty on Business and Human Rights will continue in another round in 2019.

In the meantime, on a more positive note, it is expected that the views expressed by a wider group of representatives of governments and civil society NGOs will be taken into account in the first draft of the treaty that will be developed in preparation for the next round of negotiations.