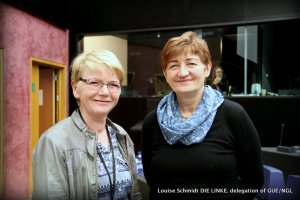 The GUE/NGL group in the European Parliament will be in Vienna from November 22 to 23 to meet Austrian left forces.
Debate will focus on confronting the rise of anti-migration policies as well as tackling the threats facing workers, democratic institutions and journalists in Austria and the EU.

Speaking ahead of the visit, GUE/NGL President Gabi Zimmer says: “We are looking forward to meeting left-wing colleagues from political parties, trade unions, NGOs, progressive think-tanks and foundations in Vienna and debating ongoing developments in Austria and the Council presidency.”

“We are seriously wondering about what the Austrian government has done so far to tackle current European challenges. Its Council programme seeks ‘a Europe that protects’ but, on the contrary, it is undermining social protection for EU citizens and it even cancelled the Council meeting on social affairs."

“We do not see any progress on migration policies. Rather, the right wing government is stirring up fear about migration. Therefore, we want to talk to our allies about the common fight against far-right policies and extremism, and the current challenges for the EU.”

Ahead of the meeting, the MEPs will take part in a public event on Thursday November 22 titled ‘The Responsibility of the Left in Europe’ alongside migration rights activists and representatives of the KPO party and Attac Austria. More information

* The main part of the conference will take place in Fleming’s Hotel, Neubaugurtel 26-28 and is open to the media. Journalists are encouraged to signal interest in attendance to David Lundy: david.lundy@ep.europa.eu