European Parliament continues to allow dual-quality products in the EU 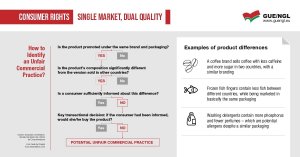 This will enable companies to continue the practice of marketing products of lower quality in some Member States in the same packaging as higher quality products in other Member States.

The Parliament’s vote took place among votes on multiple proposals to amend consumer legislation in the EU that were presented by the European Commission as a ‘New Deal for Consumers’.

"The ‘New Deal for Consumers’ fails to tackle the dual-quality issue.”

“Instead, it continues to allow profit-maximising strategies of companies to degrade Europeans – especially from Central and Eastern Europe – to the status of second class consumers.

“It is high time we end these business practices in the spirit of a more communal and united Europe.”

“A year ago, the European Commission promised us, through the words of President Juncker and Commissioner Jourová that the dual quality of goods on the EU internal market would be prohibited.”

“However, the result of the negotiation is the opposite. With today's decision, the dual quality of goods on the EU market has been de facto legalised.

“Thus, the directive adopted is a slap in the face for all consumers in the Member States of Eastern and Central Europe.

“Unfortunately, this decision will be perceived very negatively by the citizens of these Member States and it will further deepen the divide between east and west,” Konečná concludes.