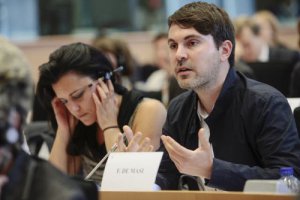 Statement ahead of the visit of a TAXE delegation to Luxemburg on the 18 May and following the rejection of a motion by the Luxemburg left party déi Lénk calling on the Luxemburg authorities to cooperate with the European Parliament's TAXE committee.

Ahead of the visit of a TAXE delegation to Luxemburg on the 18 May and following the rejection of a motion by the Luxemburg left party déi Lénk calling on the Luxemburg authorities to cooperate with the European Parliament's TAXE committee, Fabio De Masi and two  Luxembourg members of the Grand Duchy's déi Lénk party made the following statements:

MEP Fabio De Masi (GUE/NGL) said: “I have proposed that TAXE should officially deplore the decision taken by the Luxemburg parliament to reject full cooperation with TAXE. The European Parliament already voted in favour of a request by GUE/NGL to demand an EU Commission statement in plenary on the indictment of whistleblower Antoine Deltour and journalist Edouard Perrin. Now I suggest that it should to deplore indictment by Luxembourg’s General Attorney on TAXE.

"According to a circular by the Luxemburg authorities dating from 1989, tax rulings should not serve the overriding motive of tax optimisation. It is unacceptable that those people who revealed practices that were even in breach of Luxemburg’s national laws are pursued while tax dodgers and the decision makers responsible remain untouched. This constitutes an attack on freedom of information and press and represents intimidation by Luxemburg’s judicial authorities.”

De Masi continued: "The government of Luxemburg must fully reveal the information contained in the Krecké Report,  including the three missing pages on tax rulings, in the interest of European taxpayers. If it continues to refuse to do so, this will also affect former prime minister and now President of the EU Commission Jean Claude Juncker. However, even TAXE is not delivering on transparency: three months after it was set up, the committee has not examined a single document from member states. Meetings with relevant decision makers and witnesses, such as Marius Kohlhave not yet been added to the agenda.”

Justin Turpel and David Wagner (déi Lénk, Luxemburg) said: "This is a defining moment for the  Luxembourg authorities to shed light on multinationals' spurious tax dodging practices in the Grand Duchy. Unfortunately, a motion by déi Lénk inspired by a decision by the Dutch parliament demanding the full cooperation of parliament and government with TAXE was rejected by a majority ranging from Christian Democrats to Greens. This was justified by the majority in the Luxemburg parliament which argued that such cooperation was happening anyway while declaring that cooperation was limited to the laws applicable in Luxemburg. It remains yet to be seen whether parliament and government are willing to fully respond to all questions relating to tax rulings in Luxemburg. So far they have refused to do so.”