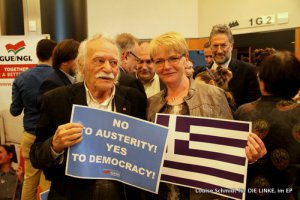 Gabi Zimmer: "Euro zone finance ministers have approved a hefty €86 billion loan package for Greece. This means that although Greece gets more breathing space, it by no means represents a way out of the crisis. €26 billion will be provided initially, mainly to service debts and to save banks and allow them to operate. A haircut has been excluded. More installments will be paid in stages when harsh reforms are rigorously implemented.

“With a privatization fund like the German Treuhand trust and collective redundancies, Greece won't exit the crisis.

“The Greek parliament has already approved these reforms. The Greeks have  met their obligations. The creditors however, are still hesitating and have postponed the key question of debt sustainability until October, because only then will the IMF decide whether it will participate or not. Schäuble, who declared at the last minute that he would not block an agreement, has nevertheless significantly dictated the conditions of the bailout. It must be clearly stated that the entire German coalition government has to take joint responsibility for this.

“While Greece is experiencing an unprecedented humanitarian disaster, and thousands of migrants on Greek islands are dependent on urgent humanitarian aid by the EU, Germany has benefited for years from the crisis. According to a study by the Halle Institute for Economic Research (IWH), the federal government saved €100 billion thanks to low interest rates mainly as a result of the Greek crisis. It has therefore confirmed the results of the preliminary report by the Truth Commission set up by the Greek Parliament to investigate the causes of the Greek debt.

"I therefore propose three immediate measures to actually open up the way to rescue Greece, its economic, social and political stability and to save the European Union as a Union of solidarity respecting its Member States

"1. A haircut, restructuring of the Greek debt in order to secure the viability of Greek society, the Greek state.

"2. The EU institutions and member states such as Germany, which has massively benefited from the debt crisis in Greece, should transfer its profits to combat the social, humanitarian and economic crisis in Greece or pay into an investment fund in accordance with the proposed Marshall Plan to revive the Greek economy.

"3. The European Commission should immediately activate the appropriate emergency programme to assist member states taking in a specific number of refugees to provide accommodation and receive them humanely.

"Greece needs our solidarity and not more humiliation. The representatives of the Euro group, who in the style of the Roman emperors are deciding on the weal and woe of economies in the EU by giving a thumbs up or thumbs down, are the last ones who should be able and willing to sufficiently and fairly respect the interests of  smaller member states or those member states in distress. It is now high time, as a matter of principle, that the legitimacy of this body of Eurogroup finance ministers within the EU is called into question."