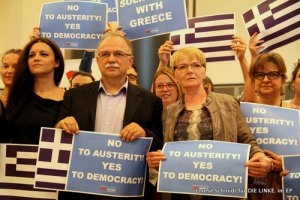 The European Parliament has repeatedly underlined the negative effects of the austerity programmes on the recovery and development of the national economies of countries in adjustment programmes. Up to now, the Parliament has been excluded or fully marginalised in the planning and decision-making process of programmes and their implementation, supervision and monitoring.

Parliament’s involvement in the review process would constitute a step forward in democratising politics in the Eurozone. It would also be a challenge for the European Parliament itself in managing to strengthen a genuine dialogue within its instruments and to reinforce in a productive way its role in the EU institutional framework, being a guarantor of greater democratic legitimacy and of the full respect of the European Treaties and the community law.