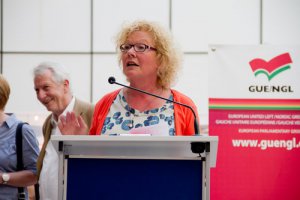 This Inter-Parliamentary Conference is convened with the aim of scrutinising EU Foreign Affairs and Defence Policy with national and European Parliamentarians from all political groups and all 28 member states.

On their return from the Conference, Sabine Lösing and Aristos Damianou commented:

"The general analysis of the current situation on security and conflict, in particular concerning the EU's neighbourhood, carried out by the Conference Participants can be shared. However, the means proposed to tackle the problems and conflicts remains, unfortunately, the same: increased militarisation, more defence and military interventions.

"We also are critical of the approach to the current refugee crisis and the distinction between 'good' and 'bad', 'entitled' and non-entitled' or the so-called economic refugees - people who flee from long-lasting drought and hunger, people who fear for their own lives and that of their children - who flee because their life and limbs are at stake. The response should in no way make the existing Fortress Europe even more watertight, nor should it be to militarise migration policy or establish save-and-rescue missions (EUNAFOR MED)."

These points reveal the characteristics of EU Foreign Affairs Policy, which is dangerous and creates more conflicts and problems than it solves. Therefore, the delegates from GUE/NGL and AKEL did not support the joint conclusions.

"Since it was not possible for our group to change the approach and content of the joint conclusions we decided, as in past meetings, to draft alternative conclusions (see attached)," said GUE/NGL Foreign Affairs Coordinator Sabine Lösing.

Sabine Lösing, Member of European Parliament, GUE/NGL.  Aristos Damianou, Member of the House of Representatives of the Republic of Cyprus, AKEL