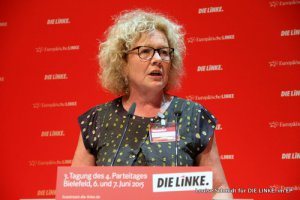 Alternative Conclusions from Sabine Lösing and Aristos Damianou to the Inter-Parliamentary Conference for the Common Foreign and Security Policy (CFSP) and the Common Security and Defence Policy (CSDP), 6/9/2015

1. Is deeply concerned about the various conflicts especially in the European Neighbourhood and about the fact that western military interventions and power politics have contributed or are even responsible for the worsening of many of those crises;

2. Highlights the need for a radical reversal of the EU’s CFSP/CSDP, one that strictly focuses on civilian crisis management, the rejection of civil-military cooperation, radical disarmament and the transfer of funds from military to civilian foreign policy instruments;

3. Stresses that eliminating the root casues of conflicts not only necessitates aspects like fundamental freedoms, human rights, international law, better governance and the rule of law but especially requires addressing social inequalities as one if not the most important aspect in order to successfully tackle and eliminate the root causes of conflicts;

4. Urges the necessity that parliaments on the national and European level need to be given more competences for the oversight of the CFSP and especially the CSDP; points to the need to harmonize the widely different national approaches with respect to their respective parliamentary “war powers”; urges that there should exist the requirement for the parliamentary approval of a military operation in every Member State as well as on the European level;

5. Calls on the Vice-President of the Commission/High Representative (VP/HR) to incorporate those aspects in the upcoming EU global strategy on foreign and security policy scheduled for June 2016;

6. Stresses that every review of the European Neighbourhood Policy has to be based on the fact that it miserably failed in its goal to build a “Ring of Friends” around Europe and instead contributed to create a “Ring of Fire”;

7. Argues that one of the primary problems in the neighbourhood are the vast social inequalities and that Europe’s approach to seek the completion of Association Agreements/Deep and Comprehensive Free Trade Areas (AA/DCFTA) with the neighbouring countries is only worsening this problem;

8. Stresses that the expansionist military policies of NATO as well as Brussels “Wider Europe”-Policy massively contributed to the escalation of the crisis in Ukraine; argues that confidence-building measures are highly important now in order to avoid a New Cold War between Russia and the West; argues that the many military exercises, the creation of NATO’s new „Very High Readiness Joint Task Force“ and other measures taken after the escalation of the crisis are only worsening the situation; therefore calls for the immediate reactivation of the NATO-Russia Council in order to achieve a de-escalation of this dangerous situation; argues that a lasting solution has to give considerations for aspects such as a neutrality for Ukraine (i.e. the withdrawal of the Association Agreement) and a reconsideration of Russia’s proposal for a European Security Treaty;

The security implications of climate change

9. Is deeply concerned that the melting of the polar ice caps makes the arctic resources potentially exploitable and that this has led to intensified competition between various also European powers in the region;

10. Calls for the immediate demilitarization of the arctic; urges the EU to seek the completion of an Arctic Treaty that, similar to the Antarctic Treaty from 1959, bans all military activity and protects the environment;

A fair and open world to cope with migration flows

11. Recalls that growing migrant flows are not the least a product of many years of social degradation as a result of the neoliberal world economic system that is championed by the Western powers; argues that the recent increase in migrant flows is highly connected to the last military interventions of the West, e.g. in Libya;

12. Argues that the European approach to border management, to erect a nearly insurmountable “Fortress Europe” and to train various African states in their capabilities to stem migrants directed to Europe as far away as possible, only forces migrants to seek more risky ways by resorting to smugglers and traffickers thereby endangering – and in many cases losing – their lives; therefore calls for the creation of legal ways to migrate into the European Union as the only way to avoid more tragedies on Europe’s borders;

13. Argues that any serious migrant policy has to start with championing a fair world economic system and a European foreign policy that prioritizes poverty alleviation, thereby fighting poverty and not the poor;

14. Rejects all efforts to “improve” the financing of CSDP-missions (e.g. via the start-up fund or ATHENA); calls for the abolition or at least the full parliamentary scrutiny over such funds – on the national as well as the European level;

15. Rejects the plan to set up a pilot project and a preparatory action in order to pave the way for a fully-fledged EU defence research programme in the next Multiannual Financial Framework starting in 2021; calls that future research and innovation activities shall have an exclusive focus on civil applications.

16. Rejects all efforts to ‘”improve” Europe’s military capacities; calls for the creation of a “European Disarmament Agency”.

­Aristos Damianou, Member of the House of Representative of the Republic of Cyprus, AKEL