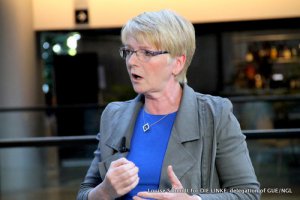 After British Prime Minister David Cameron cancelled the meeting with European Parliament's Conference of Presidents and instead bilateral talks were arranged separately, Gabi Zimmer, President of the GUE/NGL, states:

"We only learnt through the press that EP President Schulz would meet Mr Cameron in his office in the presence of the three sherpas, Mr Guy Verhofstadt, Mr Elmar Brok and Mr Roberto Gualtieri.

"Talks behind closed doors cannot replace an open and transparent debate in the presence of democratically elected representatives.

"The way in which Mr Schulz handled this whole procedure undermines the Conference of Presidents and the European Parliament as a whole.

"Mr Cameron's requests to the European Union include deep changes to EU fundamental principles such as equal treatment, non-discrimination and free movement in which the European Parliament should be fully involved as it touches upon the Parliament's prerogatives in its role as legislator.

"We are also concerned to see how the European Union is so prompt to accept its fundamental rules being called into question by Cameron's demands and how, on the other hand, the EU was so uncompromising about Greece's legitimate requests.

"Mr Schulz would be well advised not to undermine in future the Conference of Presidents and not to create several different standards among his interlocutors.

"For its part, the EU would also be well advised not to follow Mr Cameron's most regressive requests in the field of social security and freedom of movement."