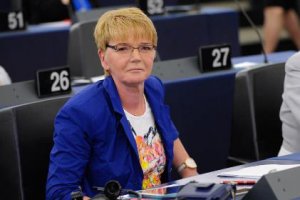 Following Hungary's failed referendum on refugees yesterday, GUE/NGL President Gabi Zimmer calls on the Commission to examine whether the referendum and Hungarian asylum legislation are in line with EU law and international obligations.

GUE/NGL President, Gabi Zimmer, comments: "Orbán has shot himself in the foot. He could not bring enough Hungarian citizens to the polls. At first glance, this appears to be a good sign."

"Despite Orbán's smear campaign which spread half-truths and lies about refugees, and despite a nationwide roadshow of his party friends, less than half the Hungarian population supported Orbán´s referendum.

"Nevertheless, we must all be alarmed by the frighteningly high level of resentment towards refugees among the people of Hungary. Orbán is the main culprit for that fear-based public opinion.

“It is shameless and appalling that an EU government attacks people fleeing from war in order to distract its population from domestic problems.

"Orbán has invested more than 16 million euros of Hungarian tax payers' money into his campaign against a fairer EU-wide relocation quota for refugees.

"Hungary was asked by the Commission to integrate less than 1,300 people. Instead of helping them, Orbán politically exploited their misery.

"He destroys solidarity, European values and Hungary´s rule of law, posing even more challenges to the common European project.

"We call on the Commission to quickly examine whether this referendum and the Hungarian asylum legislation are in line with EU law and international obligations.

"If the EU does not take immediate action, it will continue to lose the confidence of its citizens," Zimmer concludes.