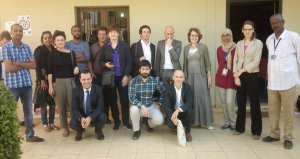 A delegation of four GUE/NGL MEPs to Sudan has uncovered the dangers and human rights costs of cooperation between the EU and Sudan on migration control.

The delegation to Khartoum in December confirmed that Sudan's northern border, which the EU wants to provide support to control, is currently controlled by the country's Rapid Support Forces. These forces are under the command of Sudan's National Intelligence and Security Service and are recruited and led by former militias responsible for mass murders in Darfur.

The Sudanese regime is also detaining and deporting victims of trafficking, and continuously violating the human rights of Sudanese people.

The delegation also helped to facilitate the launch of an appeal to the European Court of Human Rights this week by five Sudanese people who went to Italy to seek asylum, but were denied the right to apply for it.

Under the framework of a bilateral agreement on police cooperation between Sudan and Italy, the five asylum seekers were returned illegally to Sudan last August, along with 43 others.

The findings of the delegation and the subsequent appeal highlight the consequences of the increasing number of deals on border control and returns among the EU and member states with third countries.

GUE/NGL Coordinator for the Civil Liberties Committee, Cornelia Ernst, comments: "The European Union's policies on border control are already failing in Europe. Imposing the same policies on countries like Sudan is just absurd."

"In this region of the world, national borders are remnants of the colonial empires and in many cases play no sensible role in people's lives. It is not even common to have passports in Sudan and nearby countries.

"The EU's approach to border control policies cannot even be applied in this context. Trying to make Sudan part of the EU's fight against refugees from eastern Africa is neo-colonial madness."

French MEP, Marie-Christine Vergiat, describes the delegation's observations on the ground: "We found that Sudan really is a key partner in the EU’s migration policies. The obsession with blocking borders is also present there; particularly in the north of the country on the road towards Libya and ultimately Europe."

Vergiat asks: "What is the point of training Sudanese security forces when we know that the northern border area is controlled by the Rapid Border Forces; militia that also operate in Darfur?"

"The only possible results of these policies are more victims and the EU losing its soul."

Basque MEP, Josu Juaristi, further explains the situation: "We were only able to visit Khartoum, although we also wanted to know the situation at the eastern border and along the 'Libyan way'."

"What we have seen there is a society under absolute social, political and police control – paramilitary control even, in some places. Democracy and human rights are being undermined every day, especially the human rights of refugees and migrants.

"Despite this, and even though the EU insists that it does not fund the regime, it is increasingly involved in closing the borders of Sudan.

"By doing so, the EU is legitimising the Sudanese government and enabling further human rights violations. It is doing all of this with the sole aim of preventing refugees and migrants from reaching Europe."

Portuguese MEP, João Pimenta Lopes, adds: "Both the EU and Sudan are seeking to take advantage of the migratory flows according to their own interests and for the wrong reasons.

"Sudan is trying to get its hands on EU funding, seeking to bypass and overcome international sanctions. And the EU is trying to take advantage of the Sudanese government's intentions in order to enforce its criminal anti-migration policies in the region.

"While doing so, the EU is directly supporting the armed forces of a repressive government, which are linked to militias, human trafficking and smuggling, thus contributing to the overall escalation in violations of human rights and international law," he argues.

A comprehensive 15-page report on the MEPs' delegation to Sudan is attached.